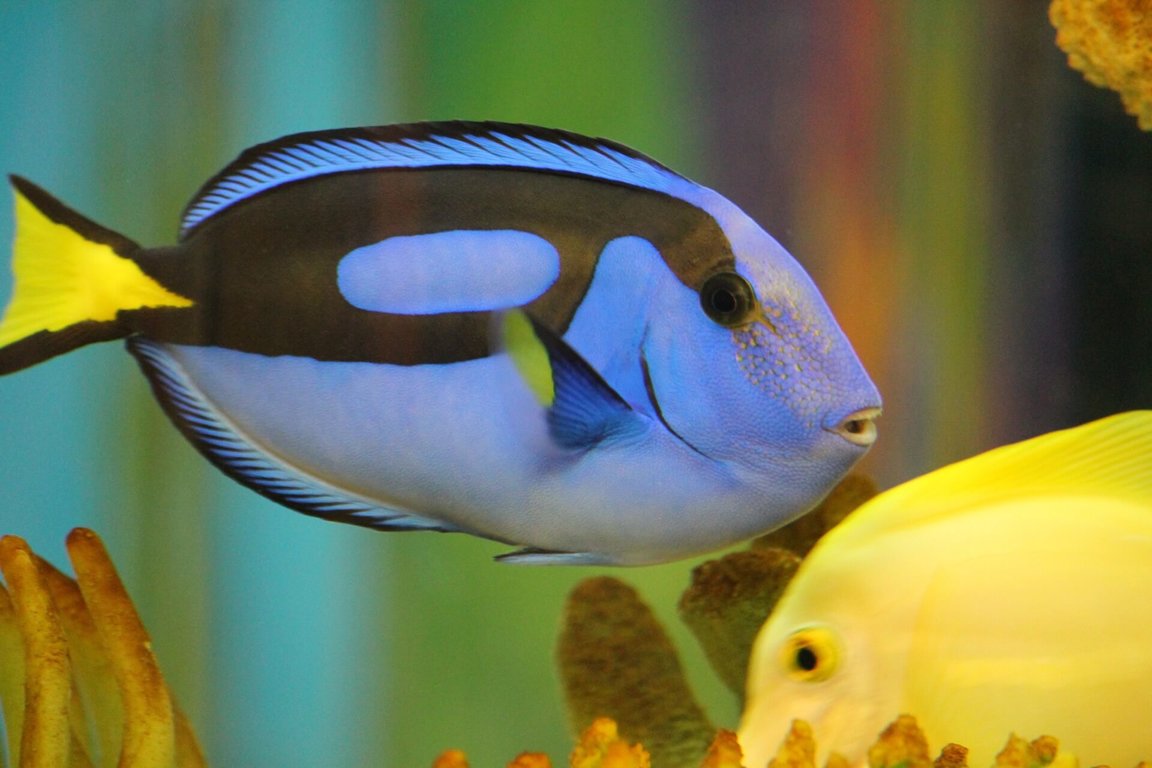 ADOPT A TANG
The tang is a small to medium sized fish inhabiting warm, coastal waters of the tropics. Well known for their vibrant colors, they are close cousins of surgeon fish and unicorn fish. There are at least 80 species of tang found in the waters of the southern hemisphere.
Tangs can adjust the intensity of their colors. When they are stressed, tang colors darken to communicate danger to other fish. Some tangs change colors at night. Other tangs, when faced with danger, can make themselves semi-transparent.
Tang live in shallow coral reefs. They prefer habitats with an abundance of food sources and places to hide from predators. The tang has a razor-sharp scalpel at the base of their tails used in self defense. When threatened, tangs will hide in coral or rocks and anchor themselves with their scalpels. They also use their scalpels against predators when needed. Some tangs will play dead by lying on their sides and remaining motionless until the predator has gone.
Tangs are omnivores but prefer a mostly vegetarian diet. Tang eat algae and other plants found in coral reefs. They also feed on larger food particles in plankton. Tang are vital in reducing algae levels on coral. Without the assistance of tang, algae could quickly overgrow and suffocate coral reefs – home to about one quarter of all ocean species. Tang often feed on the algae on sea turtle shells. Some tang species will eat small fish and invertebrates.
Tangs usually breed year round in tropical areas. A male tang will secure a temporary breeding territory for a pair, or group, of female tangs. Males may establish dominance by showing their bright colors and fighting aggressively. Female tangs release about 40,000 eggs into the water. Male tangs then fertilize the eggs. After spawning, parent tangs swim off and do not care for their offspring. Baby tangs, called fry, hatch in under a week. It can take up to 12 months for a tang to reach sexual maturity.
Due to their small size, tangs have numerous natural predators including larger fish, sharks, eels, crustaceans and large invertebrates.
Tangs can live over 30 years in the wild.
THREATS TO TANGS
Tangs are one of the most popular fish species to be inhumanely kept in tanks and aquariums for human amusement. Ripped from their natural environment, often using cyanide that kills coral and other animals, they are shipped for thousands of miles in tiny plastic bags. Even if they survive the cyanide, many tangs do not survive the extremely stressful journey. Captive tangs suffer from confinement, stress, lack of proper nutrition, parasites and competition with other captive fish. Most die premature deaths. No aquarium can replicate the tangs’s natural environment. These animals belong in coral reefs, not in tiny glass tanks.