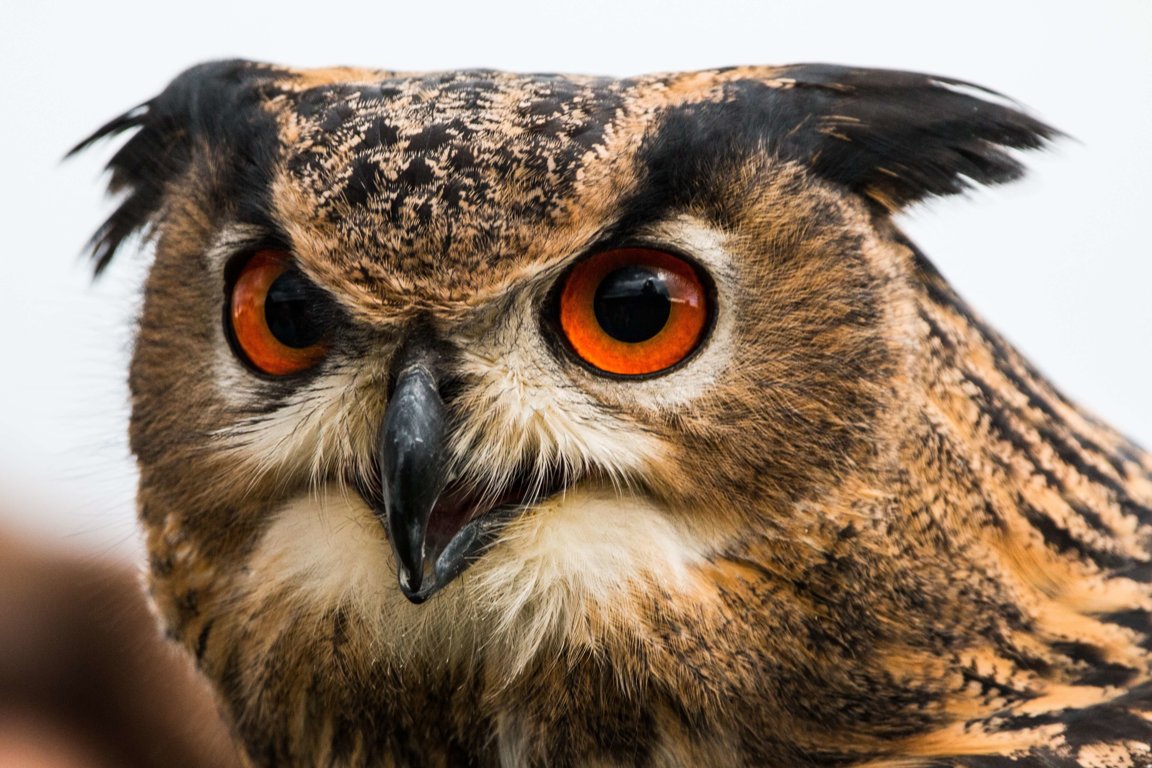 ADOPT AN OWL
Owls include about 200 species of mostly solitary and nocturnal birds of prey. They have an upright stance, a large, broad head, binocular vision and binaural hearing, and feathers adapted for silent flight. Owls hunt mostly small mammals, insects, and other birds, although a few species specialize in hunting fish. They are found in all regions of the earth except Antarctica and some remote islands. Owls are divided into two families: the true owls, Strigidae; and the barn-owls, Tytonidae.
Owls have large forward-facing eyes and ear-holes, a hawk-like beak, a flat face, and a circle of feathers around each eye. The feathers make up a disc that can be adjusted to sharply focus sounds that come from varying distances onto the owls' ears. Caught prey can be felt by owls with the use of filoplumes -  feathers on the beak and feet that act as "feelers".
Most birds of prey have eyes on the sides of their heads, but the owl's forward-facing eyes permits a greater sense of depth perception necessary for low-light hunting. Although owls have binocular vision, their large eyes are fixed in their sockets - as are those of other birds - so they must turn their entire head to change views. Owls can rotate their heads and necks as much as 270 degrees, having fourteen neck vertebrae as compared to seven in humans. As owls are farsighted, they are unable to see clearly close up, but their far vision (particularly in low light) is exceptionally good. Owl eyes can move independently of each other.
The smallest owl - weighing as little as 1 oz and measuring 5 inches, is the elf owl. The largest owl by length is the great grey owl which measures around 28 inches on average and can attain a length of 33 inches. However, the heaviest (and largest winged) owls are two similarly-sized eagle owls; the Eurasian eagle-owl and Blakiston's fish owl. These two species can have a wingspan of 6.6 feet and a weight of 10 lb.
Different species of owls make different sounds; this wide range of calls aids owls in finding mates or announcing their presence to potential competitors.
Many species of owls have facial and head markings, including face masks, ear tufts and brightly colored irises. These markings are generally more common in species inhabiting open habitats, and are thought to be used in signaling with other owls in low light conditions.
Owl eggs usually have a white color and an almost spherical shape, and range in number from a few to a dozen, depending on species and the particular season. For most, three or four is the more common number. Eggs are laid at intervals of 1 to 3 days and do not hatch at the same time.
Most owls are nocturnal, actively hunting their prey only in darkness. Several types of owl, however, are crepuscular - active during the twilight hours of dawn and dusk. A few owls are active during the day.
All owls are carnivorous birds of prey and live mainly on a diet of insects and small rodents such as mice, rats and hares. Some owls are also specifically adapted to hunt fish. Much of the owls' hunting strategy depends on stealth and surprise. The dull coloration of their feathers can render them almost invisible under certain conditions. Their flight is practically silent. An owl's sharp beak and powerful talons allow it to kill its prey before swallowing it whole. They regurgitate the indigestible parts of their prey (such as bones, scales, and fur) in the form of pellets.
Owls can have either internal or external ears, both of which are asymmetrical. With ears set at different places on its skull, an owl is able to determine the direction from which the sound is coming by the minute difference in time that it takes for the sound waves to penetrate the left and right ears. The owl turns its head until the sound reaches both ears at the same time, at which point it is directly facing the source of the sound.
While the auditory and visual capabilities of the owl allow it to locate and pursue its prey, the talons and beak of the owl do the final work. The owl kills its prey by using the talons to crush the skull and knead the body. The beak of the owl is short, curved and downward-facing, and typically hooked at the tip for gripping and tearing.
The coloration of the owl’s plumage plays a key role in its ability to sit still and blend into the environment, making it nearly invisible to prey. Owls tend to mimic the coloration, and sometimes even the texture patterns, of their surroundings. Usually, the only tell-tale sign of a perched owl will be its vocalizations or its vividly colored eyes.
THREATS TO OWLS
All owls are listed in Appendix II of the international CITES treaty (the Convention on Illegal Trade in Endangered Species of Wild Fauna and Flora). Although owls have long been hunted, owl poaching may be on the rise. Owls are threatened by poisons and herbicides accumulated in rodents, vehicle collisions, entrapment in fences and wires, habitat loss, nesting site loss, disturbance by birders, and harassment by humans due to superstitions.
Owls are also victims of the animal entertainment industry. Keeping owls in captivity in tiny enclosures causes them emotional and psychological stress as a result of confinement and boredom. Even under the best of circumstances, captivity is cruel for wild animals. Confined to tiny areas and gawked at by crowds, animals in exhibits and acts endure constant stress. Without exercise, they become listless, their immune systems are weakened, and they become prone to sickness; many resort to self-mutilation in reaction to stress or boredom. Mental illness is rampant among confined animals. Torn from their families and deprived of all dignity, every part of their lives is controlled by their captors.