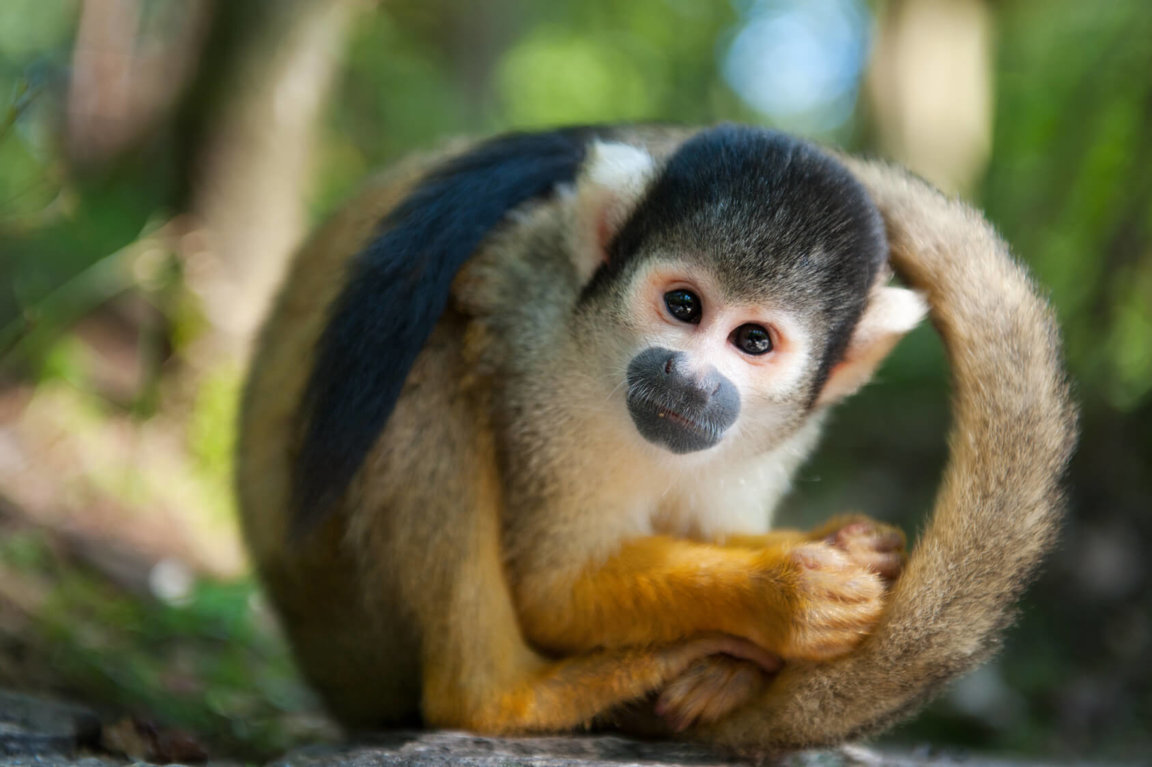 ADOPT A SQUIRREL MONKEY
Squirrel monkeys are New World monkeys of the genus Saimiri. They are the only genus in the subfamily Saimirinae.

Squirrel monkeys live in the tropical forests of Central and South America. Their range extends from Costa Rica through central Brazil and Bolivia.

Squirrel monkey fur is short and close, colored olive at the back and yellowish orange on their bellies and extremities. Their throats and ears are white and their mouths are black. The upper part of their heads are hairy. This black and white face gives them their German name, "death's head monkeys".

Squirrel monkeys are small in size. Males are bigger than females. On average, they can reach 9.8 to 14 inches in height and 1.7 to 2.4 pounds in weight. Remarkably, the brain mass to body mass ratio for squirrel monkeys is 1:17, which gives them the largest brain, proportionately, of all the primates. Humans have a 1:35 ratio. Squirrel monkeys have excellent eyesight and are able to distinguish colors, allowing quick identification of fruit among dense vegetation.

Like most of their New World monkey relatives, squirrel monkeys are diurnal and arboreal. Unlike the other New World monkeys, their tail is not used for climbing, but as a kind of "balancing pole" and also as a tool. Their movements in the branches are extremely speedy. They live together in multi-male/multi-female groups with up to 500 members. These large groups can, however, occasionally break into smaller troops.

Squirrel monkeys have a number of vocal calls, including warning sounds to protect themselves from large falcons, which are a natural threat to them. Their small body size also makes them susceptible to predators such as snakes and felids. Squirrel monkeys are omnivores, eating primarily fruits and insects. Occasionally they also eat nuts, buds, eggs and small vertebrates.

For marking territory, squirrel monkeys rub their tail and their skin with their own urine. They spread urine on their hands and feet to mark their path when they are moving through the treetops. By following the scent, members of a group can locate each other.

The mating of squirrel monkeys is subject to seasonal influences, usually mating from January to March. Babies are born during the rainfall season when food supplies are the most abundant. Males fight with each other to gain the opportunity to mate. Females give birth to young during the rainy season, after a 150 to 170 day gestation. The mothers exclusively care for the young. Babies spend the first couple of weeks on the mother's backs. At the age of 10 months, they become independent and able to fend for themselves. Saimiri oerstedti are weaned by 4 months of age, while S. boliviensis are not fully weaned until 18 months old. Female squirrel monkeys reach sexual maturity at age 3 years, while males take until age 5. They live to about 15 years old in the wild, about 20 years in captivity.

Three squirrel monkey species are in danger of extinction. S. o. oerstedti is listed as "endangered," S. o. citrinellus is listed as "critically endangered" and S. vanzolinii is listed as "vulnerable." Population numbers of all five species are threatened by habitat loss, with their large troops being pushed into smaller and smaller areas of their natural habitat. Squirrel monkeys face the threats deforestation for logging,  land clearance for agriculture and tourism development. Insecticide spraying, the pet trade and electrocution from electric power lines have also adversely affected the squirrel monkey.

Due to their small size and highly intelligent nature, squirrel monkeys are victims of the pet industry. They are captured from the wild, or bred from captive animals. Being stolen from the wild has had an effect on wild populations.

Thousands of primates are peddled as "pets" each year, including monkeys, apes and lemurs. Highly intelligent and social animals, they suffer terribly in the inhumane pet trade.

These wild animals are bred in captivity and taken from their mothers within hours or days of birth, or stolen from their mother in the wild who is often killed in the process. Sold like toys by unethical businesses and backyard breeders, profit is put above the welfare of the animals. Unprepared guardians purchase the animals, often with little knowledge on primate care. Adorable baby monkeys quickly grow into aggressive and territorial adults. Guardians often resort to drastic measures to control the animals, such as inhumane tooth removal. Eventually they are abandoned, given to roadside zoos or sold to another unprepared family where the cycle begins again. They end up living their lives in tiny cages, isolated, lonely, deprived of their wild nature and social interaction with their own kind.

The complex physical, psychological and social needs of primates can never be met when they are kept as pets. Living in constant frustration, these wild animals can inflict serious and catastrophic injuries. They can also spread diseases that are deadly to humans, including viral, bacterial, fungal and parasitic infections. It is common for monkeys to carry tuberculosis, hepatitis and simian herpes B.

Even the smallest of monkeys are incredibly strong and become unpredictable when they reach sexual maturity. Hundreds of people have been injured by attacks from primates, sometimes causing permanent disability and disfigurement.

Every year thousands of monkeys are imprisoned in laboratories, where they are abused, neglected and killed in invasive and painful experiments. They are either bred in government or commercial facilities or laboratories, or captured from the wild. Those born in laboratories are torn from their mothers usually within three days of birth. Those from the wild are often taken from their mothers, who are sometimes killed. They are crammed into tiny crates with little to no food or water and taken to filthy holding centers, followed by long and terrifying trips in the cargo holds of passenger airlines. Following the traumatic separation from their families and/or homes, monkeys in laboratories are usually confined to small, barren cages. They barely have enough room to sit, stand, lie down or turn around.

90 percent of primates in laboratories exhibit abnormal behaviors caused by the physical abuse, psychological stress, social isolation and barren confinement that they are forced to endure. Many go insane, rocking back and forth, pacing endlessly in the cages, and engaging in repetitive motions and acts of self-mutilation.

Their fundamental needs and desires are disregarded and they are subjected to painful and traumatic procedures. Most animal experiments are not relevant to human health and do not contribute meaningfully to medical advances. Human clinical and epidemiological studies, human tissue and cell-based research methods, cadavers, sophisticated high-fidelity human patient simulators and computational models are more reliable, more precise, less expensive and more humane than animal experiments.

MONKEYS IN THE ENTERTAINMENT INDUSTRY

The use of monkeys as “entertainers” removes animals from their natural habitat; depriving them of the ability to freely engage in instinctual behaviors. Both children and adults are desensitized to animal mistreatment by the animal entertainment industry. Whether they're at a zoo, on a film set, or under a circus tent, monkeys used as entertainment are forced to perform unnatural and painful tasks through abusive training methods.

Animals used in film, television, advertising or as sports mascots are ripped away from their mothers as infants. They are forced to spend most of their lives in small cages. They often live alone, resulting in severe psychological anxiety. “Performing” is stressful, confusing and often torturous. Training methods may involve beating the animals, causing them to be constantly anxious and fearful. When the animals become too large to handle, they are often dumped at shoddy roadside zoos and other substandard facilities, where they spend the rest of their lives in small, barren cages—many in solitary confinement. “Retirement” from entertainment is a long life of misery for these highly intelligent and sensitive animals. The American Humane Association’s (AHA) “No Animals Were Harmed” seal of approval is extremely misleading. AHA does not monitor living conditions of animals off set, during pre-production training, or during the premature separation of infants from their mothers.

Circus animals are forced to travel in box cars or trucks for months at a time with no regard for temperature, exercise or normal interaction with their own kind. These animals do not willingly stand on their heads, jump through rings of fire, or ride bicycles. They don’t perform these tricks because they want to and they don’t do any of these meaningless acts in their natural habitat. They do not perform because they are positively reinforced. Instead, they are trained with varying levels of punishment, neglect and deprivation.

Even under the best of circumstances, captivity is cruel for wild animals. Confined to tiny areas and gawked at by crowds, animals in exhibits and acts endure constant stress. They may suffer from temperature extremes and irregular feeding and watering. Without exercise, they become listless, their immune systems are weakened, and they become prone to sickness; many resort to self-mutilation in reaction to stress or boredom. Mental illness is rampant among confined animals. Torn from their families and deprived of all dignity, every part of their lives is controlled by their captors.