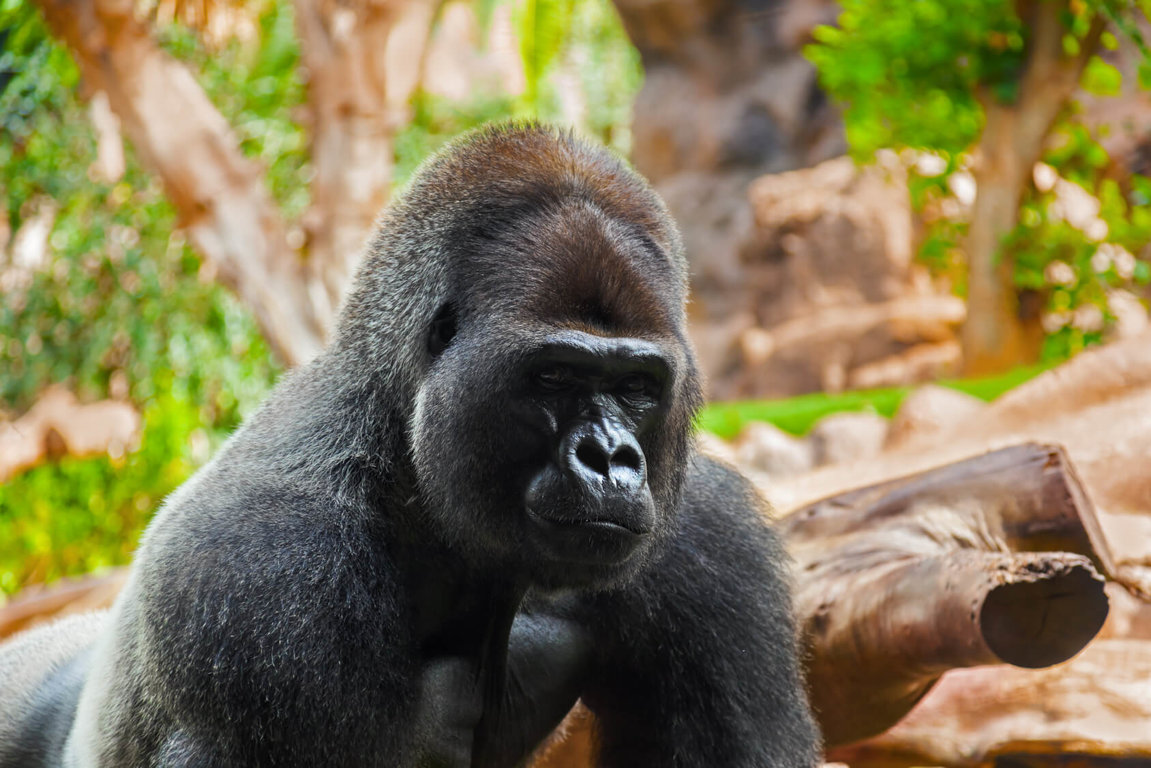 Descendants of monkeys found in Africa and Arabia, gorillas are herbivorous apes found only in the African continent. There are two broad species of this African animal. One is the Eastern gorilla and the other the Western gorilla. The Eastern gorilla has two subspecies. The Western gorilla also has two subspecies. All gorilla species are listed as endangered by the International Union for Conservation of Nature (IUCN).
Gorilla populations have been greatly reduced by habitat loss, disease and poaching. Protecting gorilla populations has proved difficult due to the vast dense areas in which they live. Conservation efforts by governmental and non governmental organizations are desperately trying to save gorillas from extinction.
Eastern Gorillas
The Eastern Lowland gorilla, or Grauer's gorilla, is mostly found on the plains and lower slopes of the Virunga volcanic mountains of Central Africa. This habitat area of the ape entirely falls in the Eastern part of the Democratic Republic of Congo (DRC). This huge, hairy ape, with a shiny black coat, can measure up to 5 feet-6 inches while standing to its full height. They weigh as much as 550 lbs or 250 kilograms. The population of this subspecies has been reduced from around 5,000 in 2004 to only 3,800 .
The mountain gorillas are an endangered species exclusively dwelling in the Rwandan half of the Virunga volcanic mountains at altitudes of 7,000 to 14,000 feet. Like their Eastern lowland cousins, they have jet black hair but with a slight bluish tinge. While standing totally erect, the mountain gorilla is an impressive sight. Reaching a height of 6 feet-2 inches, it has an enormous arm span of 8 feet-6 inches and can weigh almost 500 lbs. There are only 880 of this sub-species left. Mountain gorillas were popularized by the film "Gorillas of the Mist" that portrayed the life of Diane Fossey, who spent two intrepid decades in the Rwandan mountains studying and fighting for the preservation of the apes.
For the mountain gorillas, major threats come from forest clearance and degradation as poor Rwandans desperately try to eke out a living. Clearing out land for agriculture and deforestation for firewood also puts a lot of pressure on the natural resources of the region and eventually on the habitat of these rare apes.
Western Gorillas
The Western lowland gorilla's habitat spans plains, forests and swamps of countries like Angola, Cameroon, Central African Republic, DRC, Equatorial Guinea and Gabon. They are smaller in size to the Eastern gorillas and have longer black hair covering almost their entire body. They number almost 125,000 and are inhumanely kept captive in zoos all over the world for human entertainment and profit.
The Cross River gorilla is a species found essentially in the Cross-Niger transition forests on the western half of the Cross River flowing into South-western Nigeria. Most of these hilly forests fall in Cameroon. They are a distinctive sub-species with short body hair and shorter skulls, smaller palates and smaller cranial vaults compared to the Western lowland gorillas.
The Western gorillas, that inhabit as many as 11 countries of Western Africa, are under threat from logging, hunting, disease and even trigger-happy militia. They often come into direct confrontation with man. Many of them are killed for their meat by impoverished and hungry tribesmen. Apes can be seen as a nuisance, too. Forced to move away from a shrinking habitat, the animals raid crops. A single group of gorillas can easily destroy an entire harvest. Villagers feel they have no recourse but to kill the animals. Only 250 to 300 of these creatures are left, making them one of the most endangered animals on the planet.
Threats To Gorillas
The greatest threat to gorillas is human poverty. They inhabit countries which are among the poorest in the world but with a high density of human population.
Being closely related to the humans anatomically, apes are susceptible to disease as much as man. Not just from poachers and militia groups, but exposure to well-meaning humans like tourists, conservationists, scientists, rangers and local communities poses a threat. Gorillas have been known to succumb to skin diseases and respiratory disorders. Outbreaks of Ebola can take many more gorilla lives than humans.
Poaching of infant mountain gorillas to cater to the illicit animal trade became a common threat in the early 2000s. Civil unrest also took a toll on the apes. The Rwandan genocide of the 1990s, and the Angolan wars of the 1980s, had an unsettling effect on the movement and habitat of gorillas. Large movements of refugees fleeing unrest, debris left behind by them, and warring militias posed major threats.
Weak local governments, virtual absence of forest regulations or conservation policies, and impoverished and disenchanted local communities all pose serious challenges to the survival of the apes.
Saving Gorillas
The only ray of hope for saving gorillas from extinction is conservation. A gradual rise in the population of mountain gorillas has taken place thanks to conservation programs. From the lowest point in 1980 when its numbers were just 254, it has now grown to 880.
Similar efforts in the Campo Ma’an National Park in Cameroon and Cross River National Park of Nigeria has held some hope for the tiny population of Cross-river gorillas dwelling there. Recent surveys show that the counts for these apes have not gone below the 300 mark.
But applying conservation measures to the lowland gorillas will be far more challenging given their wider habitat coverage. Efforts must be made to save the apes before it's too late.