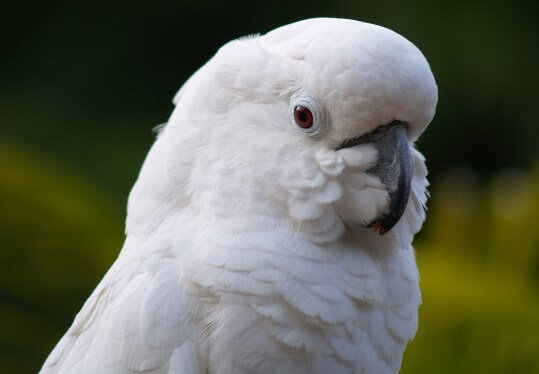 Cockatoos are parrots of any of the 21 species that belong to the bird family called Cacatuidae. The main family in the superfamily known as Cacatuoidea. Alongside the Strigopoidea (huge New Zealand parrots) and the Psittacoidea (real parrots), they make up the order Psittaciformes (parrots).
Cockatoos are identifiable by their conspicuous crests and curved bills. With their high energy levels and natural curiosity, they are among the most remarkable and adored members of the parrot family. Their plumage is mostly less colorful than the other parrots, mainly white, black or grey, and frequently features colored patterns in the cheeks, crest or tail.
Cockatoos are found in Australia and some other small island countries toward the north and west. They live in forested territories of all types, from the eucalyptus forests to pine forests, as well as rain forests. They can likewise live in the lower slopes of mountain regions and mangroves and open country lands where they feed upon grass seeds.
Cockatoos are monogamous breeders with pair-bonds that can last for many years. Numerous birds pair up in the flocks before they reach their sexual maturity and sometimes delay breeding for at least a year. Courtship is very simple, especially for established pairs, with the black cockatoos alone engaging in courtship feeding. Established pairs do take part in preening one another, however all types of courtship drop off after incubation starts, perhaps because of the strength of the pair-bond.
The vocalizations of cockatoos are harsh and loud. Their vocalizations serve various functions, including enabling members to recognize one another, alarming others of predators, showing individual moods, keeping up the union of a flock, and as notices when protecting nests.
Cockatoos are different from other parrots in that their crest can be raised when needed. They are mostly white and black (with a couple of notable exceptions like the pink and grey galah). This is due to the absence of a special texture, called the Dyck texture, in their feathers. In various parrots, the presence of this texture gives color by the way it reflects light.
Cockatoos are diurnal and require daylight to search for food. They are not early risers, rather they wait until the sun has warmed their roosting destinations before feeding. All the species roost. They are highly social and forage in noisy and colorful flocks. These mostly differ in size based on the availability of food. During times of plenty, flocks are relatively small numbering a hundred birds or less. During the drought season or other times of adversity, flocks may contain a thousand or more birds.
Cockatoos do not have any oil glands, however they produce a fine powder from the breakdown of special downy feathers. The powder serves to protect their feathers and also keeps them clean.
Cockatoos eat seeds, corms, tubers, flowers, fruits and insects. Cockatoos regularly feed in huge flocks, especially when ground-feeding.
Cockatoos can live for 60 years or more, and have been known to live over 100 years.
THREATS TO COCKATOOS
Some cockatoos species have been affected by territory loss, especially from a deficiency of suitable nesting hollows after extensive mature trees are cleared. A few species have adapted well to the human changes and are seen as agricultural pests. They are inhumanely “controlled” by poisoning, shooting, or capture followed by gassing. Non-lethal destruction mitigation utilizes territory manipulation and sacrifice of crops to distract cockatoos from the major harvest.
Five cockatoo species - the Goffin's cockatoo, lesser sulphur-crested cockatoo, palm cockatoo, red-vented cockatoo, and the Moluccan cockatoo - are endangered with extinction. All other cockatoo species are threatened.
Humans also capture these birds to sell them as pets. Captivity is cruel for wild animals. Animals are captured from their native habitat and transported to various countries to be sold as “pets”. Backyard breeders also supply exotic animals. The sellers of these animals often disregard the dangers, difficulties, physical and physiological needs of the animals they peddle. The suffering of the animals in the hands of unqualified and hapless buyers appears to be of no concern in the lucrative exotic pet trade.
Birds' instinctive yearning to fly is thwarted when they are confined to a cage. Even in a large aviary, it is virtually impossible to provide birds in captivity with a natural existence, since naturally changing temperatures, food, vegetation, and landscape cannot be recreated indoors, nor, of course, can the birds fly freely. Thousands of birds are taken away from their families and flocks every year, packed up as if they were plastic dolls, and sold at bird shows or through pet shops. Many don't survive the journey, and those who do are likely to be destined for a life of misery.
For people who have aviaries or who have the space for pairs or groups of birds to fly indoors, adoption from sanctuaries, rather than buying birds from shops or breeders, is recommended by animal campaigners.