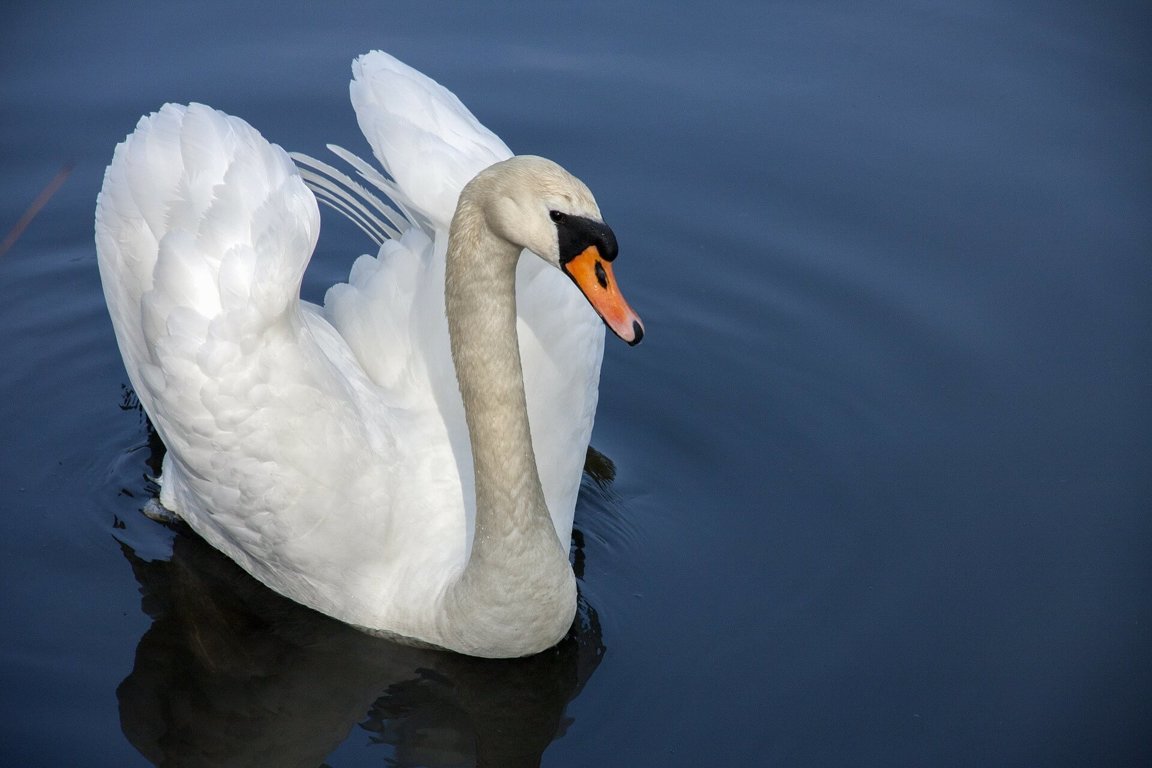 Majestic, beautiful and graceful, swans are large aquatic birds closely related to geese and ducks. Swans inhabit both sides of the Equator across the Northern and Southern Hemispheres. There are several species of swan, differing in size, color and behavior: the Black swan, Mute swan, Black-necked swan, Trumpeter swan, Tundra swan (which includes the Bewick’s swan and Whistling swan), and the Whooper swan.
Northern swans are white with orange beaks. Southern swans are white and black with orange, red or black beaks. The legs of swans are usually a dark blackish gray color, except for two South American species that have pink legs. Black swans are known for swimming with one leg – tucking the other above their tails to change direction more smoothly and quickly when they spot predators or prey.
Swans have streamlined bodies, long necks and webbed feet. Their wings are very strong, making them able to fly short distances despite being such heavy birds. Their incredibly strong wings can cause fatal injuries to other animals.
A male swan is called a cob, a female swan is a pen, and a baby swan is a cygnet.
Swans are omnivores, but eat a mostly vegetarian diet. Swans eat aquatic plants, seeds, insects and sometimes small fish. Swans do not have teeth, but their beaks have serrated edges that look like teeth and aid in catching and eating food. When threatened, swans engage in busking - rearing up with flared wings and hissing, snorting, grunting and flapping.
Some species of swan are migratory, either wholly or partly.
Swan couples establish strong bonds. Some mate for life. Swans often touch beaks to kiss. When they kiss, their necks form a heart.
Swans can sleep on land or in the water. When sleeping on land they stand on one leg.
Swans molt each summer. When molting they are unable to fly for about 6 weeks. Breeding couples do not molt at the same time as they, and their babies, would be too vulnerable to predators.
During mating season, courtship dances are accompanied by a variety of hissing and grunting sounds. Some swans sing and honk during mating, and engage in synchronized swimming and head bobbing.
Swan couples build their nests on land with twigs and leaves. Unlike most ducks and geese, male swans help with nest construction and egg incubation. Female swans lay 3 to 9 eggs. Baby swans hatch following an incubation period of a little over a month. Baby swans are usually swimming in the water with their mother in a couple of days. They stay close to their mother for warmth and protection. Swans are known to aggressively protect their nests and babies.
Due to their large size, swans have few natural predators. Natural predators include wolves, foxes and raccoons that prey on swans and their eggs.
Swans can live 30 years in the wild.
THREATS TO SWANS
Swans are a threatened species due to hunting, habitat loss and pollution. Some species are endangered. Swan populations are declining.
Swans are also victims of the animal entertainment and pet industries – used as decorations in ponds and lakes.