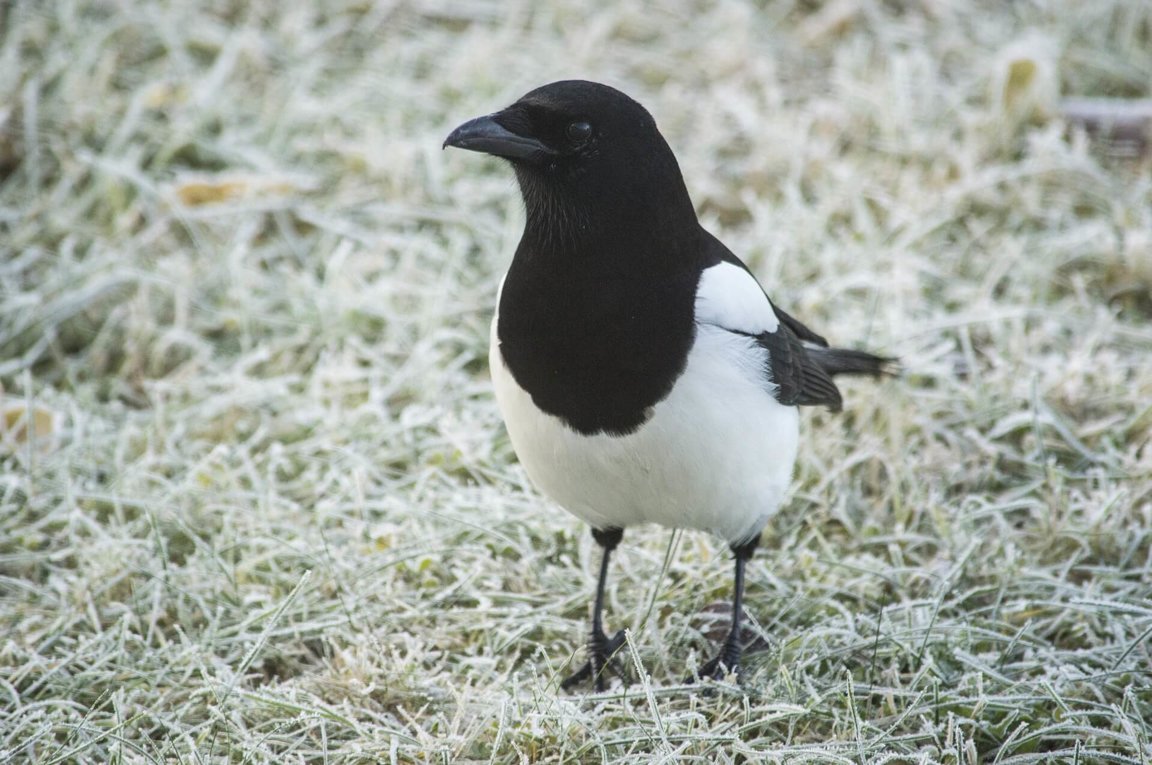 Magpies are small to medium sized birds found throughout the globe. There are about 20 species of magpie spread across Asia, Europe, Africa, North America and parts of Australia. Magpie inhabit grasslands, open woodlands, farmlands, hedgerows, gardens and parks.
Magpies are closely related to crows, but the magpie has very distinguishable black and white feathers. The size of the magpie varies depending on species. Magpies looks much larger than they really are; their tails make up half their length. The average weight of a magpie is only half that of a pigeon.
The upper part of a magpie body and wings are black-colored with an iridescent green, blue and purple sheen. Their bellies, parts of their wings, flanks and ramps are covered with white plumage. Magpies have long, pointed beaks. Their wings are short and rounded. Their tails are long and wedge-shaped. Female magpies and male magpies look alike.
Magpies are known for being incredibly intelligent birds, and their ability to mimic the sounds of other birds. They are self-aware and are able to recognize their own reflections in mirrors. Magpies communicate via loud rattling calls.
Magpies are dominant and curious birds. They are very social and gregarious. Magpies have a confident demeanor and are often seen strutting about. They recognize and scold humans who they perceive to be threats to their nests.
Despite possessing large wings, magpies do not usually take long flights. They prefer to stay close to cover. When in flight, their long tails make it easy to maneuver through the air and rapidly change direction. Magpies will hide in bushes and trees to catch prey and hide from predators. They are able to sense approaching danger very quickly.
Magpies are omnivorous birds, feeding on a variety of seeds, nuts, fruits, insects, eggs, mammals, reptiles and amphibians. Magpies take advantage of new food sources created by humans.
Magpies have a reputation for collecting shiny objects to decorate their nests, but research shows that objects that are shiny actually repel magpies.
Magpie couples typically remain in their territories, but non-breeding magpies wander widely in bands or gangs. Magpies live in loose flocks during the summer months, and in large communities of about 200 birds during the winter months.
Magpies mate for life. Magpie mating season takes place in spring when the weather begins to warm. They usually build huge nests in the trees. If there are no suitable trees, magpies will build nests on the ground. A magpie nest has a roof, and often two entrances. Some magpies build open nests. Nests can take 50 days to construct. Old nests are often repaired and reused, or a new nest is built on top on the old nest. Female magpies lay up to 8 small eggs. Magpie babies hatch after an incubation period of about 3 weeks. Female magpies incubate the eggs; male magpies provide food for the mother. Both magpie parents take care of their babies. Magpie chicks are able to fly in about 3 to 4 weeks. They remain with their parents for about 2 months, then fly off to join other juvenile magpies.
Natural predators to magpies include dogs, foxes, cats and other birds.
Magpies live about 6 years in the wild.
THREATS TO MAGPIES
In some parts of the world magpie populations are in decline due to habitat loss, animal agriculture, pollution, pesticides and changes in climate.
Magpies are often considered pests, but they are an important part of the ecosystem. Magpies help control insect populations, clean up dead animals and garbage, and their nests are used by many other animals. Although magpies prey on songbirds, they do not have a significant impact on songbird populations. The real reason for the decline in small bird populations is habitat destruction. The misconception that magpies are pests results in thousands being caught and killed every year.