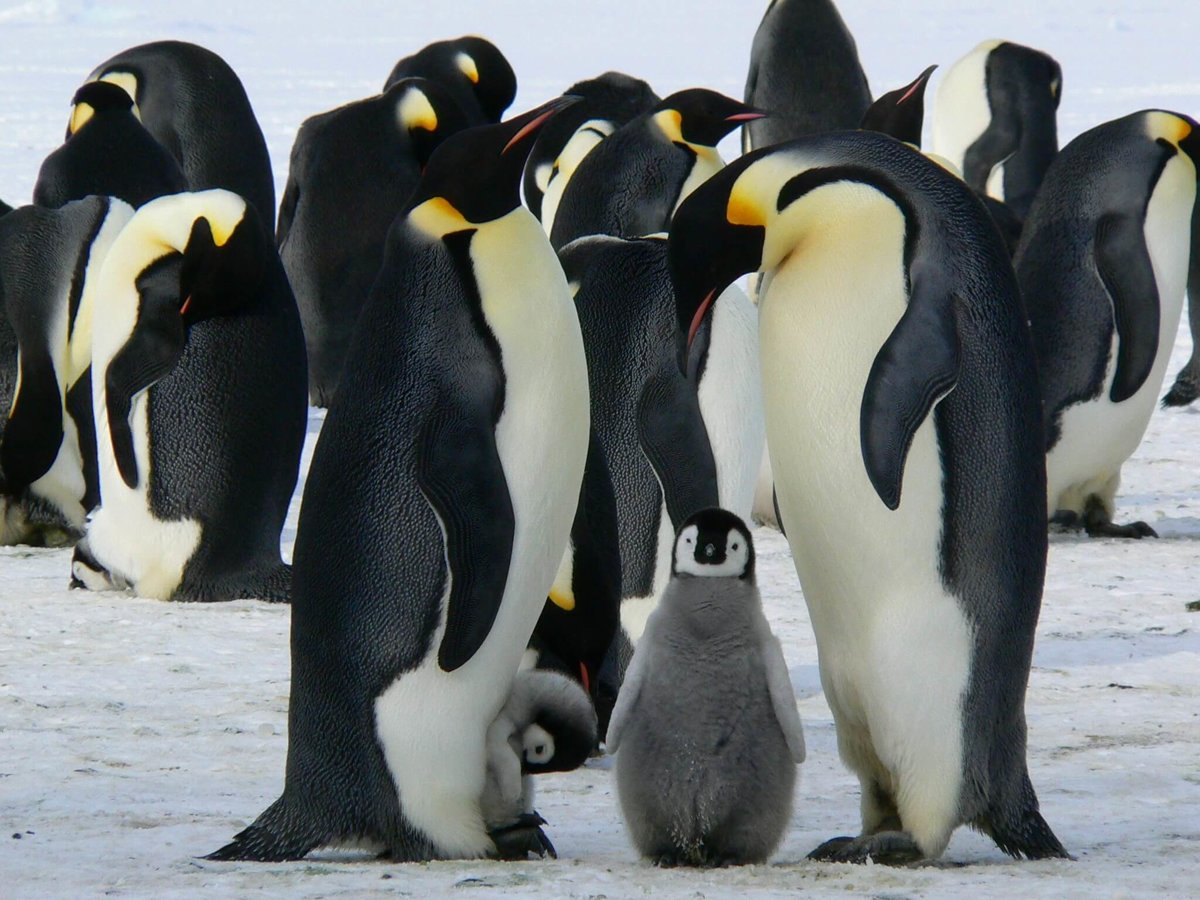 Emperor penguins (Aptenodytes forsteri) are the largest penguins in the world, with an incredible capability to dive deep waters. Emporor penguins perform one of the hardest migrations in the animal kingdom to reach their nesting grounds in Antartica. They have an amazing ability to withstand extreme freezing temperatures.
Penguins are flightless sea birds. They can be many different colors from the chest up. Most species have black backs and white fronts. Penguins are able to control their body temperature on land by facing either their black back or white front to the sun. This coloration also camouflages them in the water. They have a thick layer of blubber that helps keep them warm.
There are 17 penguin species, varying greatly in size. The largest is the emperor penguin at 4 feet tall and about 65 to 90 pounds. The smallest is the little penguin, also known as the blue or fairy penguin, which weighs 2 pounds.
Penguins can live up to 15 to 20 years in the wild. They are found on every continent in the southern hemisphere, from the Antarctic to the Galapagos Islands.
Penguins are carnivores and mostly eat krill, a tiny shrimp-like animal, and other fish. Their sharp, spine-like teeth allow them to catch fish up to 10 inches long, which they swallow head first.
With compact, streamlined bodies, penguins can swim an average of 2.5 to 5 miles per hour – using their wings as paddles – with some species swimming as fast as 7.5 miles per hour. They also "toboggan," laying on their belly and pushing themselves along the ice with their flippers and feet. Most penguin species spend several hours a day preening and waterproofing their feathers with an oil produced from a gland located above their tail feathers. Feathers are important to keep penguins warm and to keep cold water from touching their skin.
Most penguin species gather in colonies in areas free from land predators during nesting. Many penguins build a nest of rocks, sticks or grass where one or two eggs are laid. Because penguins only eat in the ocean, they must fast while mating, incubating eggs and guarding chicks. The male and female usually take turns tending to the eggs and raising the chicks while the other mate returns to the ocean to eat. Adult feathers replace a chick’s down at about two to four months. Once the chick has adult feathers, it is ready to swim and hunt on its own.
Penguins are superbly adapted to an aquatic life. Their wings have become flippers, useless for flight in the air. In the water, however, penguins are astonishingly agile. Within the smooth plumage a layer of air is preserved, ensuring buoyancy. The air layer also helps insulate the birds in cold waters. On land, penguins use their tails and wings to maintain balance for their upright stance.
All penguins have a white underside and a dark (mostly black) upperside. This is for camouflage. A predator looking up from below (such as an orca or a leopard seal) has difficulty distinguishing between a white penguin belly and the reflective water surface. The dark plumage on their backs camouflages them from above.
The small penguins do not usually dive deep; they catch their prey near the surface in dives that normally last only one or two minutes. Larger penguins can dive deep in case of need. Dives of the large Emperor Penguin have been recorded which reach a depth of 1,870 feet and last up to 20 minutes.
Penguins either waddle on their feet or slide on their bellies across the snow, a movement called "tobogganing", which allows them to conserve energy and move relatively fast at the same time.
Penguins have an excellent sense of hearing. Their eyes are adapted for underwater vision, and are their primary means of locating prey and avoiding predators; in air, conversely, they are nearsighted. Their sense of smell has not been researched so far.
They are able to drink salt water safely because their supraorbital gland filters excess salt from the bloodstream. The salt is excreted in a concentrated fluid from the nasal passages.
Penguins have no external genitalia.
THREATS TO PENGUINS
Penguins living more than 60 degrees south of the equator are protected from hunting by the 1959 Antarctic Treaty. Penguins are currently threatened by human activity. Threats include oil spills, human exploitation for guano and food, entanglement in fishing gear, human encroachment, over-fishing of food sources and introduced predators such as dogs. The Galapagos penguin is the only species listed as endangered under the U.S. Endangered Species Act.
Penguins are victims of the animal entertainment industry. While zoos and aquariums may appear to be educational and conservation-oriented, most are designed with the needs and desires of the visitors in mind, not the needs of the animals. Many animals in zoos and aquariums exhibit abnormal behavior as a result of being deprived of their natural environments and social structures. Some zoos and aquariums do rescue some animals and work to save endangered species, but most animals in zoos were either captured from the wild or bred in captivity for the purpose of public display, not species protection. The vast majority of captive-bred animals will never be returned to the wild. When the facility breeds too many animals they become "surplus" and often are sold to laboratories, traveling shows, shooting ranches, or to private individuals who may be unqualified to care for them.