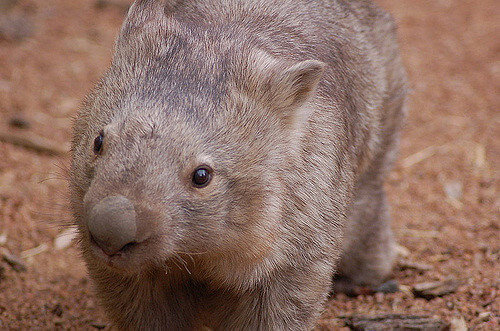 Wombats are medium sized marsupials that look like a cross between a pig, a bear and a gopher. Wombats inhabit only Australia and the surrounding islands. Wombats are burrowing mammals who prefer to live in mountains, forests and grasslands.
There are three species of wombat. The common wombat is the most widespread and has a bare nose. The northern hairy-nosed wombats and southern hairy-nosed wombats have hairy noses, larger ears and softer fur.
Wombats have tough barrel-like bodies, short legs, compact heads and short broad feet. Wombats are about the size of a medium-size dog. They range in colors from sandy hues to darker browns and blacks. While wombats typically walk with an awkward waddle, they can run at high speeds when threatened.
Wombats have long claws used to dig burrows. Wombat burrows are often extensive networks of underground tunnels and small chambers. A wombat can have up to twelve burrows. Many wombats live solitary lives, but some wombats form underground colonies with other wombats.
Wombats mark their territories by defecating poop that doesn't roll away because it is square shaped. Special backside bones allow wombats to squeeze their feces into cubes. They put their poop cubes in mushrooms, on fallen trees and on rocks to announce their territories. Their feces helps them to navigate their areas at night. Wombats also mark their home range by rubbing their scent on trees and grunting at intruders.
Wombats are herbivores, feeding on grasses, bark and shoots. Wombats have rodent like incisors that never stop growing and must be gnawed down by chewing on vegetation. They receive the majority of their water from vegetation and can go years without drinking water. Special enzymes in their stomachs allow wombats to digest tough roughage. It takes about 14 days for wombats to digest their food.
Wombats are nocturnal. They spend most of the day under ground, coming out at night to eat. Although their closest relatives are koalas, wombats do not climb trees – but they are good swimmers.
Wombat mating usually takes place when food is abundant. Male wombats will fight over female wombats. Some wombats will chase a female in circles until she gives into mating. Female wombats make coughing noises when being chased.
Being marsupials, female wombats have a pouch on their bellies where wombat babies are nurtured. But unlike other marsupials, wombat pouches are backwards, opening toward the rear rather than the head to allow mothers to dig without getting dirt in the pouch.
Newborn wombats are very small and undeveloped, about the size of a jellybean. They crawl into their mother's pouch and stay there until they are about 5 months old. After leaving the pouch, baby wombats will often crawl back into the pouch to nurse or escape danger. They are able to care for themselves when they are around 7 months old.
Wombats are preyed upon by foxes, dingos and Tasmanian devils. Large birds hunt wombat babies. Wombats are well protected in their underground burrows as most predators cannot fit into the narrow tunnels. They also have toughened backsides, made mostly of cartilage. Threatened wombats dive into their tunnels headfirst, blocking the entrance with their sturdy rumps.
Wombats can live up to 29 years in the wild.
THREATS TO WOMBATS
Some wombats are endangered species. Their populations have been decreasing rapidly as a result of habitat loss, invasive species, animal agriculture and hunting. Urban sprawl, forestry practices and road accidents are also taking their tole on wombats.