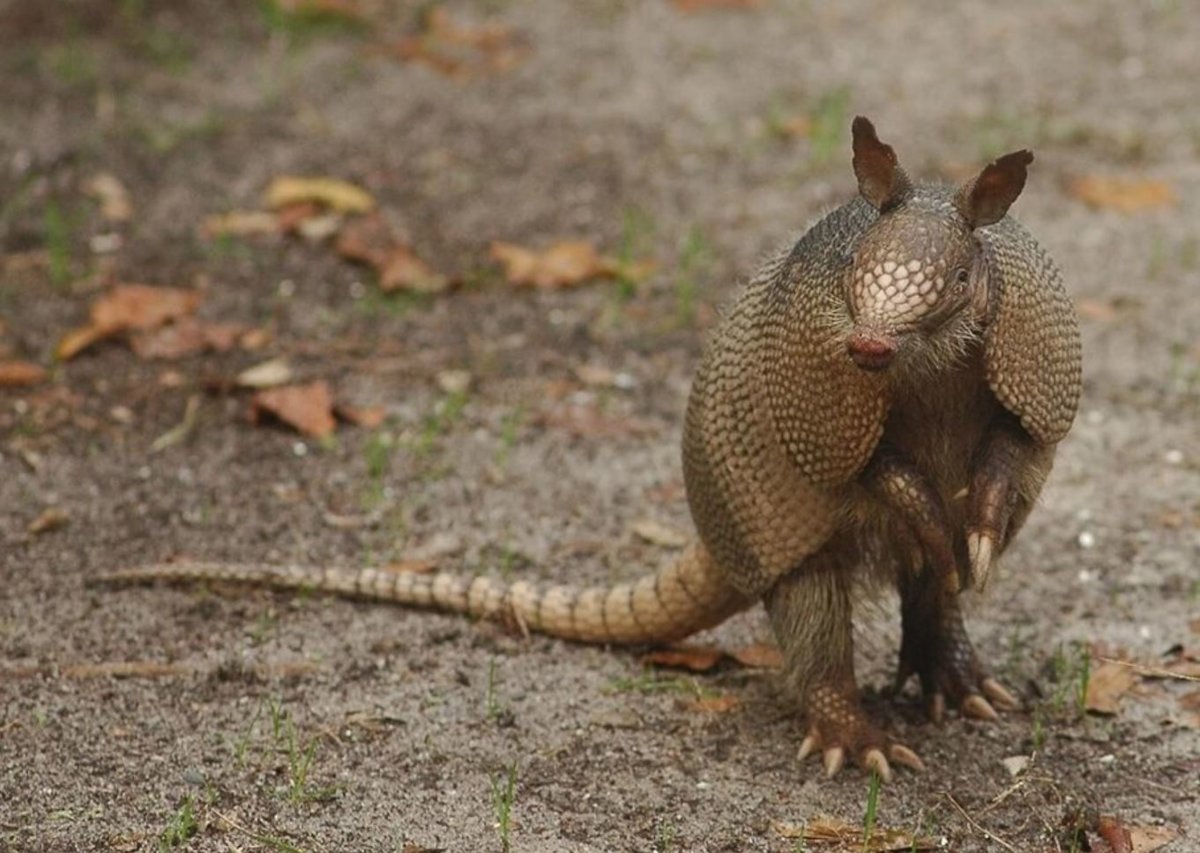 Armadillos are barrel-shaped animals covered with natural armor. They are the only mammals with shells. Armadillos are native to the Americas, with over 20 species of armadillo inhabiting the American continent. One species of armadillo inhabits the United States, while nine-banded armadillos are the only armadillo species outside of the South American tropics.
Most armadillos prefer wetlands with thick shade and sandy soil that is easy to dig. Some armadillos live in grasslands, woodlands or thorn scrubs. Armadillos burrow underground, in grass, and into hollow logs. Armadillos have a low metabolic rate, meaning they have naturally low body temperatures.
Armadillos vary greatly in size. The smallest armadillo is the tiny, pink fairy armadillo. The giant armadillo is the largest species. Armadillos can be gray, pink, red, yellow or black.
Armadillos have strong legs and long claws for hunting underground insects and digging. They have small eyes and poor vision so rely heavily on their highly developed sense of smell. They also use the wiry hairs along their sides and bellies to feel their way around. Armadillos have pointy snouts and long, sticky tongues, much like anteaters – their close cousins.
The armadillo's protective shell is constructed of plates of bone covered with small, overlapping scales called scutes. One species can curl into a ball when threatened by predators. Their undersides, soft skin and fur are protected when they curl up. Other species of armadillo run, dig, or press their bodies down in the ground to keep from getting flipped over by a predator. Armadillos can outrun most predators. They run amazingly fast. Some armadillos can also jump quite high into the air when startled. The screaming hairy armadillo emits an extremely loud, alarm-like vocalization when frightened.
Armadillos are insectivores, feeding mostly on insects. They use their long, sticky tongues to extract ants and termites from their tunnels. Armadillos may also eat worms, spiders, snakes and frogs. An armadillo's diet varies based on their habitat.
Armadillos are good swimmers. They can fill their stomachs and intestines with air to float. Armadillos can hold their breath for 6 minutes, and even walk along the bottoms of ponds, lakes and rivers.
Most armadillos are solitary animals, coming together only to mate or to keep warm during colder temperatures. They cuddle up with leaves and grass. Armadillos spend much of their time sleeping, up to 16 hours a day. Armadillos usually forage for food in the mornings and evenings. In hotter months, armadillos may be nocturnal, active at night. One species of armadillo hibernates in the winter.
Breeding season for armadillos varies by species. An armadillo can have up to 56 babies during their lifetime – from one to 12 babies at a time. Mother armadillos give birth following an up to five month gestation period. Baby armadillos have soft shells when first born, which harden quickly. They live with their mother for a few months, feeding only on her milk. Father armadillos do not assist with raising the young. Their mother teaches her baby armadillos how to forage. Baby armadillos are independent in six months to one year.
Armadillos are preyed upon by several predators, including bears, wolves, wildcats, birds of prey, dogs and cougars.
Armadillos can live up to 30 years in the wild.
THREATS TO ARMADILLOS
Armadillos are threatened by habitat loss, hunting for their meat and shells, pollution, pesticides, vehicle collisions and animal agriculture. They are often viewed as pests and exterminated. Most armadillo species are quickly decreasing in population. Armadillos are also inhumanely captured to sell in the illegal exotic pet trade. Most captive armadillos die quickly after being caged and transported.