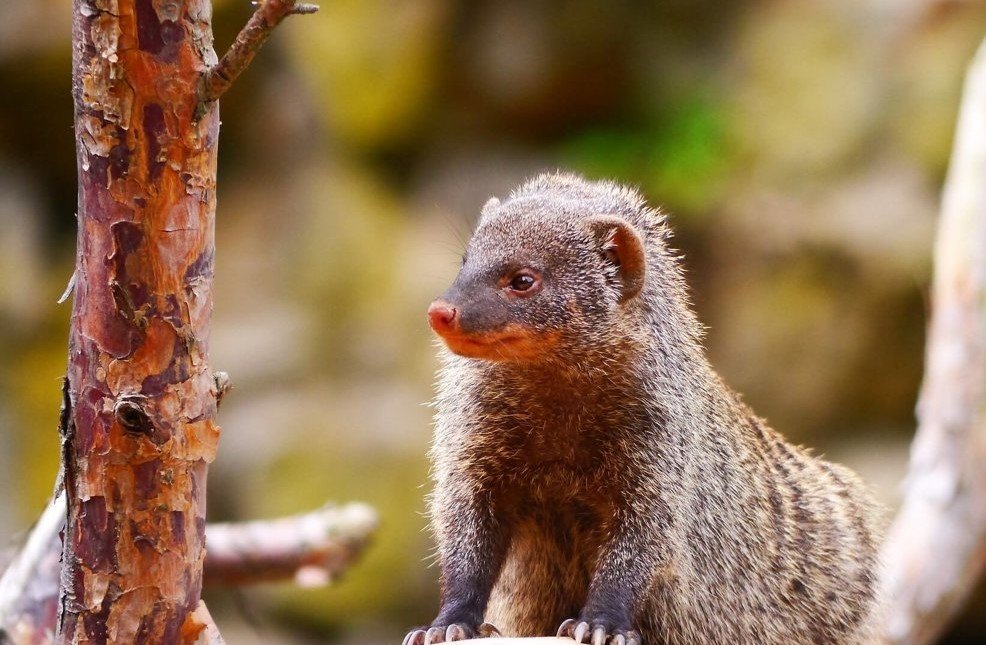 Mongooses are small mammals with a similar appearance to meerkats and weasels. Mongooses are not rodents; they are members of the Herpestidae family. Mongooses naturally inhabit Africa, Asia and parts of Europe and have been introduced to the Caribbean and Hawaiian islands. There are about 34 species of mongoose.
Mongooses vary in size depending on species. Most mongooses have a long-shaped face and body, short legs and small, round ears. Mongooses have grayish or brown fur. Some species of mongoose have patterned fur or ringed tails. They are a little lighter than weasels, making them more agile and able to avert danger better than weasels.
The smallest mongoose is the dwarf mongoose. The largest mongoose is the white-tailed mongoose.
Some mongooses are solitary, while other species of mongoose live and work in communities called packs, mobs or colonies. Colonies can have as many as 50 mongoose residents. Some mongooses groom each other. Colonies may be lead by an alpha male and female who can be the only two residents who mate and reproduce. Community members may have specific jobs and duties. Some hunt, some baby sit, others guard. Elders and youngsters are often cared for by the entire pack. Mongooses are known for using tools.
Each species of mongoose has adapted to their particular ecosystem. Some inhabit treetops, some rocky areas, and others live in semi-aquatic ecosystems. Many mongooses live in burrows that they either build themselves, or take over from other animals. Mongoose burrows are made up of a complex system of tunnels.
Mongooses are active during the day and sleep at night. They chatter incessantly to each other with a humane-like speech that combines discrete units of sound using vowel and syllable combinations. Mongooses sound alarm calls when they spot predators. During mating season they produce high-pitched giggling sounds to inform potential partners they are ready to mate. Mongooses also use scent to communicate their reproductive status and to mark their territories.
Mongooses are omnivores, feeding on both plants and animals. Most mongooses prefer to feed on small mammals, amphibians, birds, invertebrates, reptiles, fish, insects and worms. They will supplement their diets with seeds, nuts, berries, eggs, fruits and roots. Mongooses are known to crack eggs, nuts and shelled animals with, or against, hard objects.
Mongooses are very fast and agile. They have a keen sense of smell, sight and hearing. They can successfully fight off snakes. Some mongooses are even resistant to snake and scorpion venom and feed on venomous snakes and scorpions.
Female mongooses usually produce just one litter each year, but are capable of producing another litter if the first litter is lost. Baby mongooses are called pups and a group of offspring is called a litter. Pup mongooses are weaned at around 6 weeks old. They then forage with their mothers until they are about 4 months old. Male mongoose babies leave their mothers when they are about 6 months old. Female mongoose babies stay with their mother longer, sometimes permanently.
Mongooses live up to 10 years in the wild.
THREATS TO MONGOOSES
Most mongoose species are threatened. The main threat to mongooses is habitat loss. Forest-dwelling mongooses are threatened by deforestation. Animal agriculture, pesticides and pollution also threaten mongooses.
Mongooses are victims of roadside shows in some countries, forced to fight with snakes. They are also victims of the pet trade, kept in tiny cages for the amusement of humans.
Mongooses were introduced to some areas to control pests, only to then be regarded as an invasive species. They have been made the scapegoat for the decline of many animal species, but habitat destruction, caused by humans, is the leading cause of threatened and endangered species.