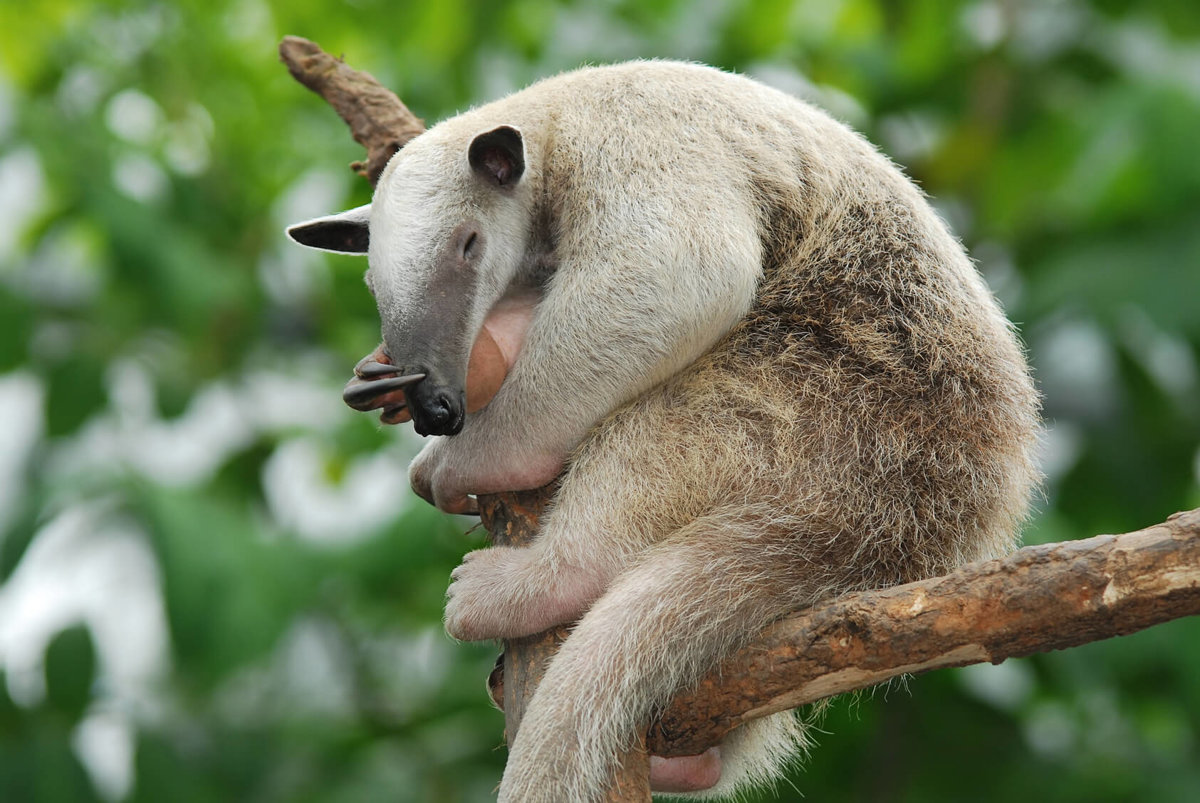 Anteater is a common name for the four mammal species of the suborder Vermilingua (meaning "worm tongue") that eat ants and termites. The individual species have other names in English and other languages. Together with the sloths, they are within the order Pilosa. The name "anteater" is also applied to the unrelated aardvark, numbat, echidnas, pangolins and some members of the Oecobiidae.
Species include the giant anteater Myrmecophaga tridactyla, about 5 feet 11 inches long including the tail; the silky anteater Cyclopes didactylus, about 14 inches long; the southern tamandua or collared anteater Tamandua tetradactyla, about 3 feet 11 inches long; and the northern tamandua Tamandua Mexicana of similar size.
All anteaters have elongated snouts equipped with a thin tongue that can be extended to a length greater than the length of the head. Their tube-shaped mouths have lips but no teeth. They use their large, curved foreclaws to tear open ant and termite mounds and for defense, while their dense and long fur protects them from attacks from the insects.
All species except the giant anteater have a long prehensile tail.
Anteaters are mostly solitary mammals prepared to defend their territories. They do not normally enter a territory of another anteater of the same sex, but males often enter the territory of associated females. When a territorial dispute occurs, they vocalize, swat, and can sometimes sit on or even ride the back of their opponents.
Anteaters have poor sight but an excellent sense of smell, and most species depend on the latter for foraging, feeding, and defense. Their hearing is thought to be good.
Anteaters, like other xenarthrans, have among the lowest body temperatures of any mammal, and can tolerate greater fluctuations in body temperature than most mammals. Its daily energy intake from food is only slightly greater than its energy need for daily activities, and anteaters probably coordinate their body temperatures so they keep cool during periods of rest, and heat up during foraging.
Adult males are slightly larger and more muscular than females, and have wider heads and necks. Fertilization occurs by contact transfer without intromission, similar to some lizards. Mating usually results in a single offspring; twins are possible but rare. The large foreclaws prevent mothers from grasping their newborns and they therefore have to carry the offspring until they are self-sufficient.
Anteaters are specialized to feed on small insects. Each anteater species has its own insect preferences: small species are specialized on arboreal insects living on small branches, while large species can penetrate the hard covering of the nests of terrestrial insects. To avoid the jaws, sting, and other defenses of the invertebrates, anteaters have adopted the feeding strategy of licking up large numbers of ants and termites as quickly as possible — an anteater normally spends about a minute at a nest before moving on to another — and a giant anteater has to visit up to 200 nests to consume the thousands of insects it needs to satisfy its caloric requirements.
The anteater's tongue is covered with thousands of tiny hooks called filiform papillae which are used to hold the insects together with large amounts of saliva. Swallowing and the movement of the tongue are aided by side-to-side movements of the jaws. The tongue is attached to the sternum and moves very quickly, flicking 150 times per minute. The anteater's stomach, similar to a bird's gizzard, has hardened folds and uses strong contractions to grind the insects; a digestive process assisted by small amounts of ingested sand and dirt.
Silky anteaters and northern tamanduas live as far north as southeastern Mexico, while giant anteaters can be found as far north as Central America. Southern tamanduas range south to Uruguay and the ranges of all species except the northern tamandua overlap in eastern Brazil.
Anteater habitats includes dry tropical forests, rainforests, grasslands, and savannas. The silky anteater is specialized to an arboreal environment, but the more opportunistic tamanduas find their food both on the ground and in trees, typically in dry forests near streams and lakes. The almost entirely terrestrial giant anteater lives in savannas. The two anteaters of the genus Tamandua, the southern and the northern tamanduas, are much smaller than the giant anteater, and differ essentially from it in their habits, being mainly arboreal. They inhabit the dense primeval forests of South and Central America. The usual color is yellowish-white, with a broad black lateral band, covering nearly the whole of the side of the body. The silky anteater is a native of the hottest parts of South and Central America, and about the size of a cat, of a general yellowish color, and exclusively arboreal in its habits.
THREATS TO ANTEATERS
Like most animals, the primary threat to anteaters is the destruction of their habitat. Human development has taken an alarming toll on the environment. Impact from land use practices such as agricultural conversion, deforestation, and urban sprawl continue to degrade and fragment remaining pockets of habitat and accelerate biodiversity loss.
Pesticides and other forms of pollution are also of serious concern, as well as genetically modified organisms (GMOs).
The main threats to the giant anteater is habitat loss by agricultural encroachment and fires. The giant anteater is classified as Near Threatened by IUCN.