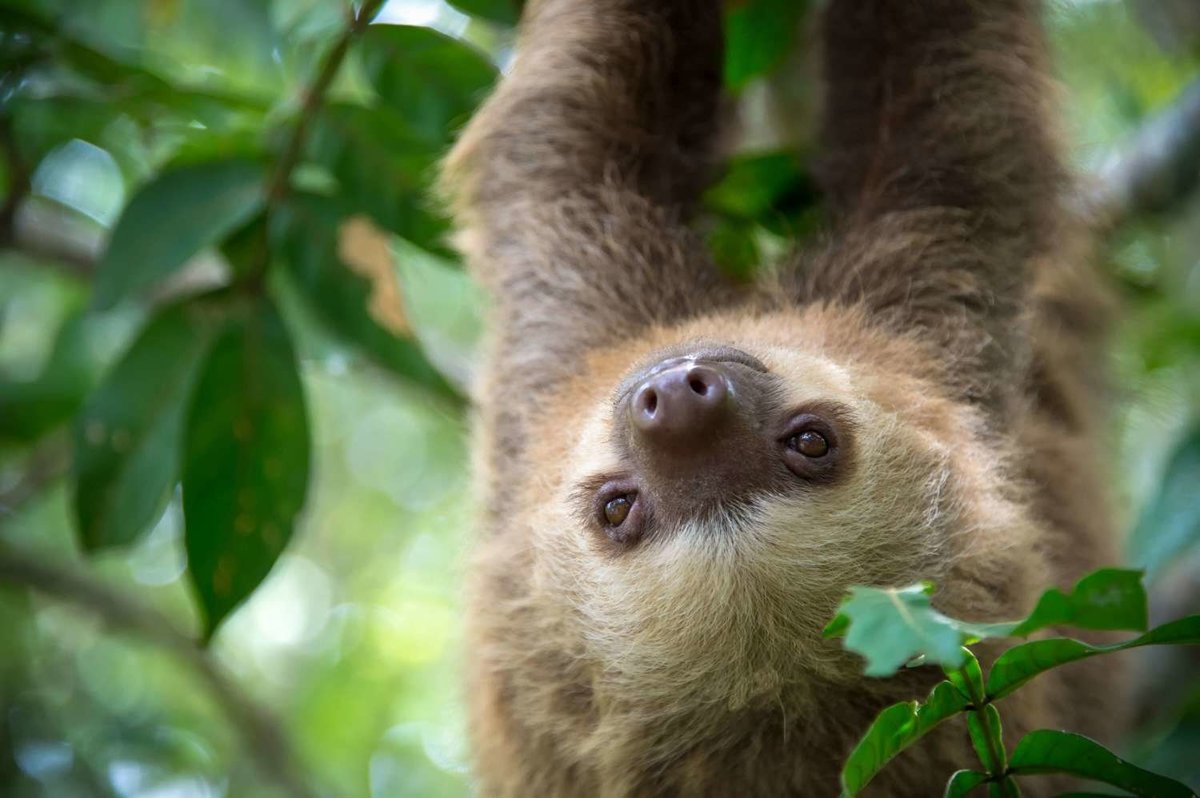 Sloths are medium-sized South American mammals belonging to the families Megalonychidae and Bradypodidae, part of the order Pilosa. Most scientists call these two families the Folivora suborder, while some call it Phyllophaga. Sloths are herbivores, eating very little other than leaves.
There are two different types of sloths: two-toed and three-toed. There are six species of sloths: Linnaeus’s two-toed sloth (Choloepus didactylus); Hoffman’s two-toed sloth (Choloepus hoffmanni); Pygmy three-toed sloth (Bradypus pygmaeus); Maned sloth (Bradypus torquatus); Pale-throated sloth (Bradypus tridactylus); and Brown-throated sloth (Bradypus variegatus). The pygmy sloth is critically endangered and the maned sloth is vulnerable.
Sloths have made extraordinary adaptations to an arboreal browsing lifestyle. Leaves, their main food source, provide very little energy or nutrition and do not digest easily. Sloths have very large, specialized, slow-acting stomachs with multiple compartments in which symbiotic bacteria break down the tough leaves. Sloths may also eat insects and small lizards and carrion. As much as two-thirds of a well-fed sloth's body-weight consists of the contents of its stomach, and the digestive process can take as long as a month or more to complete. Even so, leaves provide little energy, and sloths deal with this by a range of economy measures: they have very low metabolic rates (less than half of that expected for a creature of their size), and maintain low body temperatures when active, and still lower temperatures when resting.
Sloth fur also exhibits specialized functions. The outer hairs grow in the opposite direction to that of other mammals, pointing away from their extremities, and in moist conditions host two species of symbiotic cyanobacteria, which may provide camouflage. Their outer fur coat is usually a thick brown, but occasionally wild sloths appear to have a green tinge to their fur because of the presence of these bacteria. The bacteria provide nutrients to the sloth, and are licked.
Sloths have short, flat heads, big eyes, a short snout, long legs and tiny ears. Their claws serve as their only natural defense. A cornered sloth may swipe at its attackers in an effort to scare them away or wound them. Despite sloths' apparent defenselessness, predators do not pose special problems. In the trees sloths have good camouflage and, moving only slowly, do not attract attention. Only during their infrequent visits to ground level do they become vulnerable. The main predators of sloths are the jaguar, the harpy eagle and humans. The majority of sloth deaths in Costa Rica are from sloths getting into electrical lines and from poachers.
Despite their adaptation to living in trees, sloths make competent swimmers. Their claws also provide a further unexpected defense from human hunters - when hanging upside-down in a tree they are held in place by the claws themselves and do not fall down even if shot from below, thus making them not worth shooting in the first place.
Sloths move only when necessary and then very slowly. They have about half as much muscle tissue as other animals of similar weight. They can move at a marginally higher speed if they are in immediate danger from a predator, but they burn large amounts of energy doing so. Their specialized hands and feet have long, curved claws to allow them to hang upside-down from branches without effort. While they sometimes sit on top of branches, they usually eat, sleep, and even give birth hanging from limbs.
Sloths go to the ground to urinate and defecate about once a week, digging a hole and covering it afterward. They go to the same spot each time and are vulnerable to predation while doing so.
Infant sloths normally cling to their mothers' fur. Females normally bear one baby every year, but sometimes sloths' low level of movement actually keeps females from finding males for longer than one year.
THREATS TO SLOTHS
Sloths are common victims of the animal entertainment industry. Sloths forced to live their lives in zoos suffer numerous health problems. Captivity is cruel for these wild animals. Confined to tiny areas and gawked at by crowds, they endure constant stress. Their immune systems are weakened, and they become prone to sickness. Mental illness is rampant among confined animals. Torn from their families and deprived of all dignity, every part of their lives is controlled by their captors.
Sloths are rising in popularity as "pets". Sold like toys by the unethical pet trade industry, they are forced to live their lives in tiny cages denied their natural instincts and social interaction with their own kind. There are very few legal breeding facilities for sloths; most are sold illegally. Sloths do very poorly in captivity.