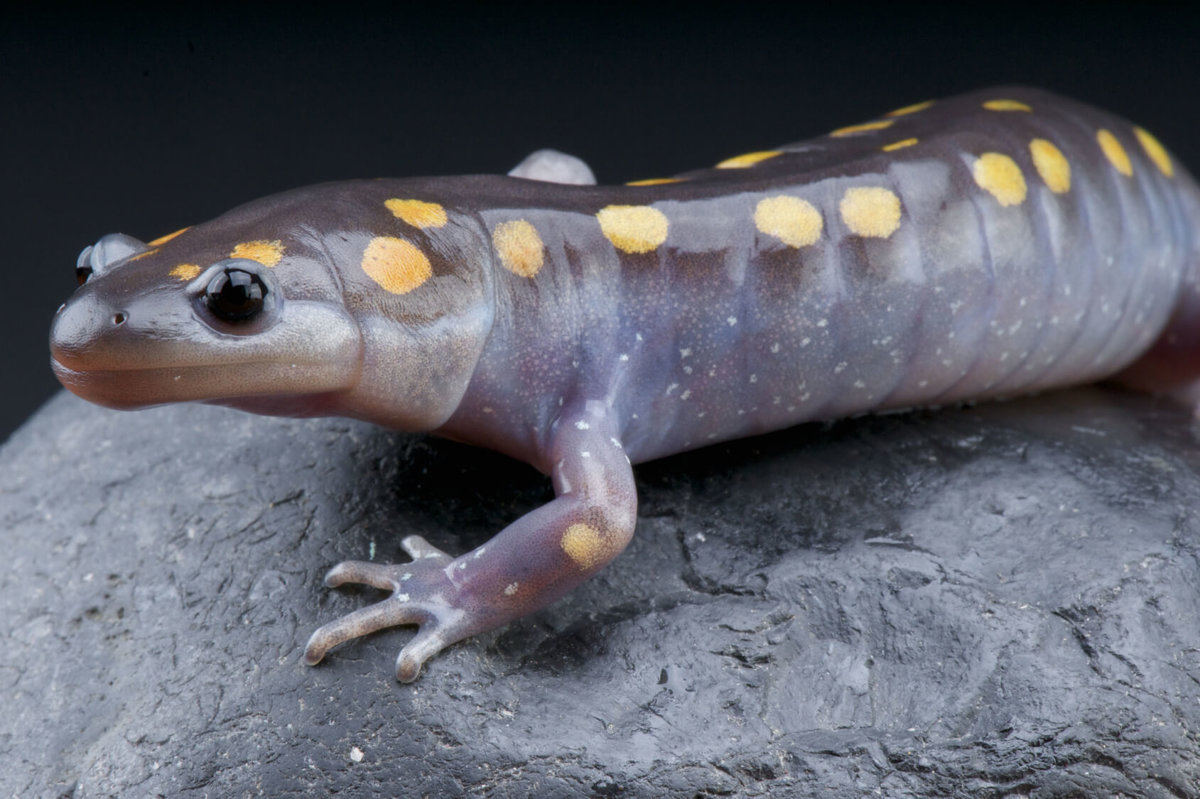 Spring rains and warmer temperatures bring out the spotted salamander. These amphibians are purple, with yellow spots, and grow up to 8 inches long.
The spotted salamander is normally secretive, living beneath rocks or under logs. They spend only two weeks or so above ground every year, feeding at night on worms, slugs, spiders and millipedes. They can secrete a noxious milky toxin from glands in their backs and tails to discourage would-be predators.
The spotted salamander offers a unique lesson in procreation. When mating, males circle a female, often so many that they form a grapefruit-size ball of animals in the water. Males drop sperm packets that the female will then choose from. When she has made her choice, she will bring the sperm into her body to fertilize her eggs. Breeding finished, the salamanders move back into the woods and hide themselves again.
Spotted salamanders are among those amphibians, programmed through evolution, to return to the water where they were born to breed. They breed in “vernal pools”, a temporary gathering of water that is too shallow to support fish that would eat the salamander’s eggs. When conditions are right, you might see hundreds of them making their way, up to a half-mile, through the woods to reach their birth pool. Vernal pools derive their name from the Latin “vernus”, meaning “belonging to spring”. Every spring, these small wetlands fill with water and blossom into life, only to dry up and disappear into the forest floor by autumn.
The multifarious organisms that inhabit a vernal pool race against time and compete with each other to flourish in a fragile environment, where rain one day too late can mean the end of their genetic survival. Each pool is a self-contained microcosm. With a single dip of the net, a student of nature can find an incredible wealth of life forms and adaptations. It is a world full of beauty and drama, close to our homes, yet one that most of us have never seen. Sadly, as development destroys our green spaces and woodlands, these pools are becoming one of nature’s most rapidly disappearing natural gems.
THREATS TO SALAMANDERS
A general decline in amphibian species has been linked with the fungal disease chytridiomycosis. A higher proportion of salamander species than of frogs or caecilians are in one of the at-risk categories established by the IUCN. Salamanders showed a significant diminution in numbers in the last few decades of the 20th century, although no direct link between the fungus and the population decline has yet been found. Deforestation, resulting in fragmentation of suitable habitats, and changes in climate are possible contributory factors.
The Chinese giant salamander, at 6 feet the largest amphibian in the world, is critically endangered, as it is collected for food and for use in traditional Chinese medicine. The hellbender is another large, long-lived species with dwindling numbers and fewer juveniles reaching maturity than previously. Habitat loss, silting of streams, pollution and disease have all been implicated in the decline.
Of the 20 species of minute salamanders in Mexico, half are believed to have become extinct and most of the others are critically endangered. Specific reasons for the decline may include climate change, chytridiomycosis, or volcanic activity, but the main threat is habitat destruction as logging, agricultural activities, and human settlement reduce their often tiny, fragmented ranges.