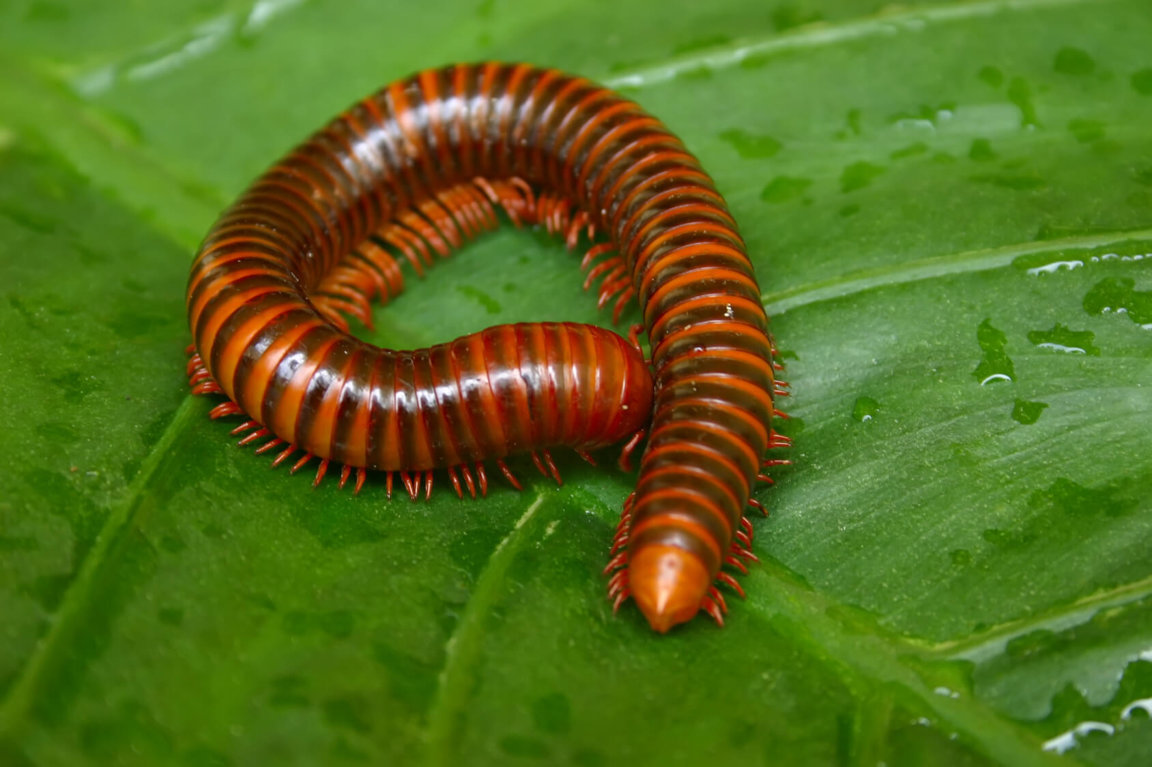 Centipedes are arthropods belonging to the class Chilopoda of the subphylum Myriapoda. They are elongated creatures with series of body segments, with one pair of legs per body segment.
Despite the name, centipedes can have a varying number of legs from under 20 to over 300. Centipedes have an odd number of pairs of legs, therefore there is no centipede with exactly 100 legs. They have a pair of venom claws and are a predominantly carnivorous.
Centipedes normally have a drab coloration combining shades of brown and red. Cave-dwelling and subterranean species may lack pigmentation and many tropical species have bright colors. Size can range from a few millimeters to about 12 inches.
Worldwide, there are estimated to be 8,000 species of centipede. Centipedes have a wide geographical range, reaching beyond the Arctic Circle. Centipedes are found in an array of terrestrial habitats from tropical rainforests to deserts. Within these habitats, centipedes require a moist micro-habitat because they lose water rapidly through their skin. Accordingly, they are found in soil and leaf litter, under stones and dead wood, and inside logs. Centipedes are among the largest terrestrial invertebrate predators.
Centipede reproduction does not involve copulation. Males deposit a sperm capsule for the female to take up. In some species, the male undertakes a courtship dance to encourage the female to engulf his sperm. In other cases, the males just leave them for the females to find. In temperate areas egg laying occurs in spring and summer but in subtropical and tropical areas there appears to be little seasonality to centipede breeding.
Some centipedes lay their eggs singly in holes in the soil; the female fills the holes with soil and leaves them. The number of eggs laid ranges from about 10 to 50. Time of development of the embryo to hatching is highly variable and may take from one to a few months. Development to adulthood is also highly variable within and among species. For example, it can take 3 years for S. coleoptera to achieve adulthood, whereas under the right conditions Lithiobiomorph species may reach a reproductive period in 1 year. In addition, centipedes are relatively long-lived when compared to their insect cousins – some living up to 6 years.
Some centipedes provide parental care to their babies. The mother stays with the eggs, guarding and licking them to protect them from fungi. Some mothers stay with their young after they have hatched, guarding them until they are ready to leave. If disturbed, the female will either abandon the eggs or eat them; abandoned eggs tend to fall prey to fungi rapidly. Some species are matriphagic, meaning that the offspring eat their mother.
Centipedes are predominantly predatory animals. They are generalist predators, which means that they have adapted to eat a variety of different available prey. Centipedes are mostly nocturnal. What centipedes actually eat is not well known because of their cryptic lifestyle and thorough mastication of food. Centipedes are eaten by a great many vertebrates and invertebrates, such as mongooses, mice, salamanders, beetles and snakes. They form an important item of diet for many species. Centipede defenses include their speed and venomous forcipules, as well as the secretion of defensive chemicals.
THREATS TO CENTIPEDES
Like most animals, the primary threat to centipedes is the destruction of their habitat. Human development has taken an alarming toll on the environment. Impact from land use practices such as agricultural conversion, deforestation, and urban sprawl continue to degrade and fragment remaining pockets of habitat and accelerate biodiversity loss.
Pesticides and other forms of pollution are also of serious concern, as well as genetically modified organisms (GMOs).