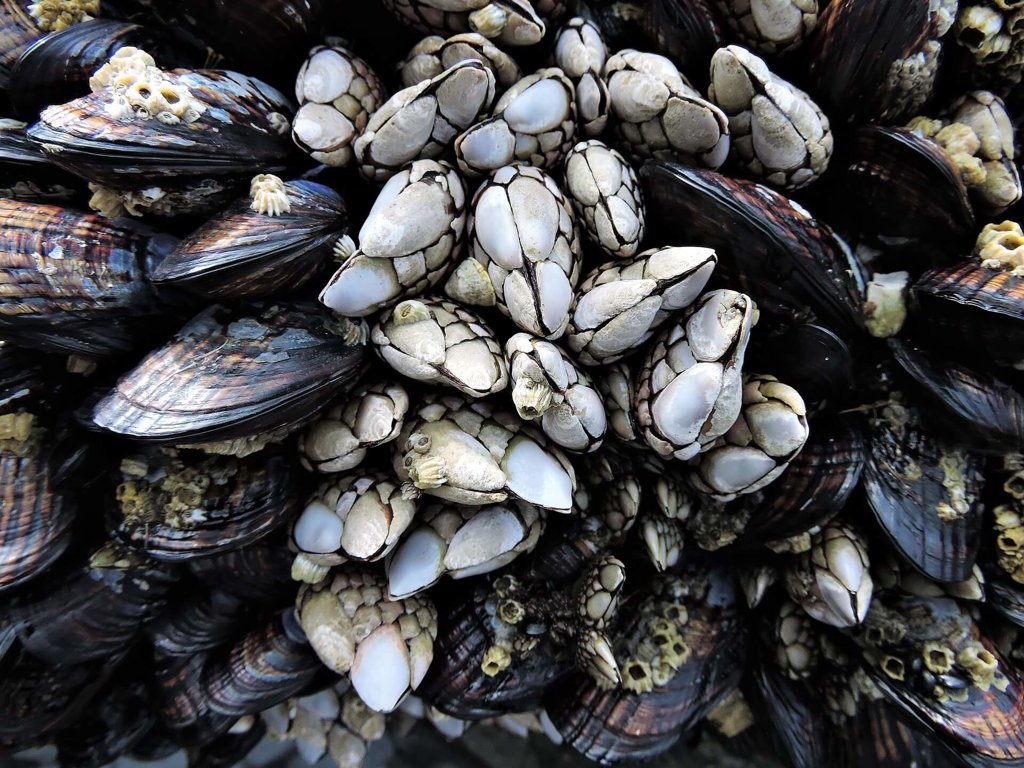 Barnacles are one of the oldest surviving creatures in the world, dating back millions of years. They have changed very little over that time. Barnacles are marine animals that live in or close to sea water. Over 1,000 species of barnacles inhabit shallow and tidal waters around the planet. Barnacles are crustaceans, closely related to lobsters and crabs.
Barnacles cannot move on their own. They are permanently attached to what they live on. As babies, barnacles are free-floating, floating around with plankton. They attach themselves to shells, rocks, animals or other objects when they are in their larvae stage. Once attached, baby barnacles develop a thin layer of flesh and an outer shell, protecting them from the elements and predators.
Barnacles often live on whales, crabs, rocks, boats and sea turtles. While a few species of barnacle are parasitic, most barnacle species are harmless to other animals. They filter feed food particles out of the water and do not harm the animal they live on.
Barnacle shells are composed of calcite. A number of plates with feathery leg-like appendages draw water into the shell to feed.
Many species of barnacle are small, but some can grow quite large.
Most barnacles are hermaphroditic, having both male and female reproductive organs. They are capable of self-fertilizing their eggs, but usually the eggs are produced by one barnacle and fertilized by another barnacle. Barnacle babies, or larvae, develop into adult barnacles in about 6 months.
Barnacles live about 5 to 10 years. Larger species may live much longer.
THREATS TO BARNACLES
Some barnacle species are threatened or endangered, or "nationally endangered".
All ocean animals are threatened by pollution, the fishing industry and changes in climate. Global fish populations are collapsing, affecting all marine life. Plastics and toxic waste are destroying aquatic ecosystems. Almost half of all ocean pollution is from irresponsible human activities that take place on land, including animal agriculture, sewage, chemical spills, industrial runoff and garbage dumping.
Marine habitats are being destroyed by coastal pollution. The clearing of mangrove forests and scraping of underwater mountain ranges through deep-sea trawling are also having detrimental affects on marine ecosystems.