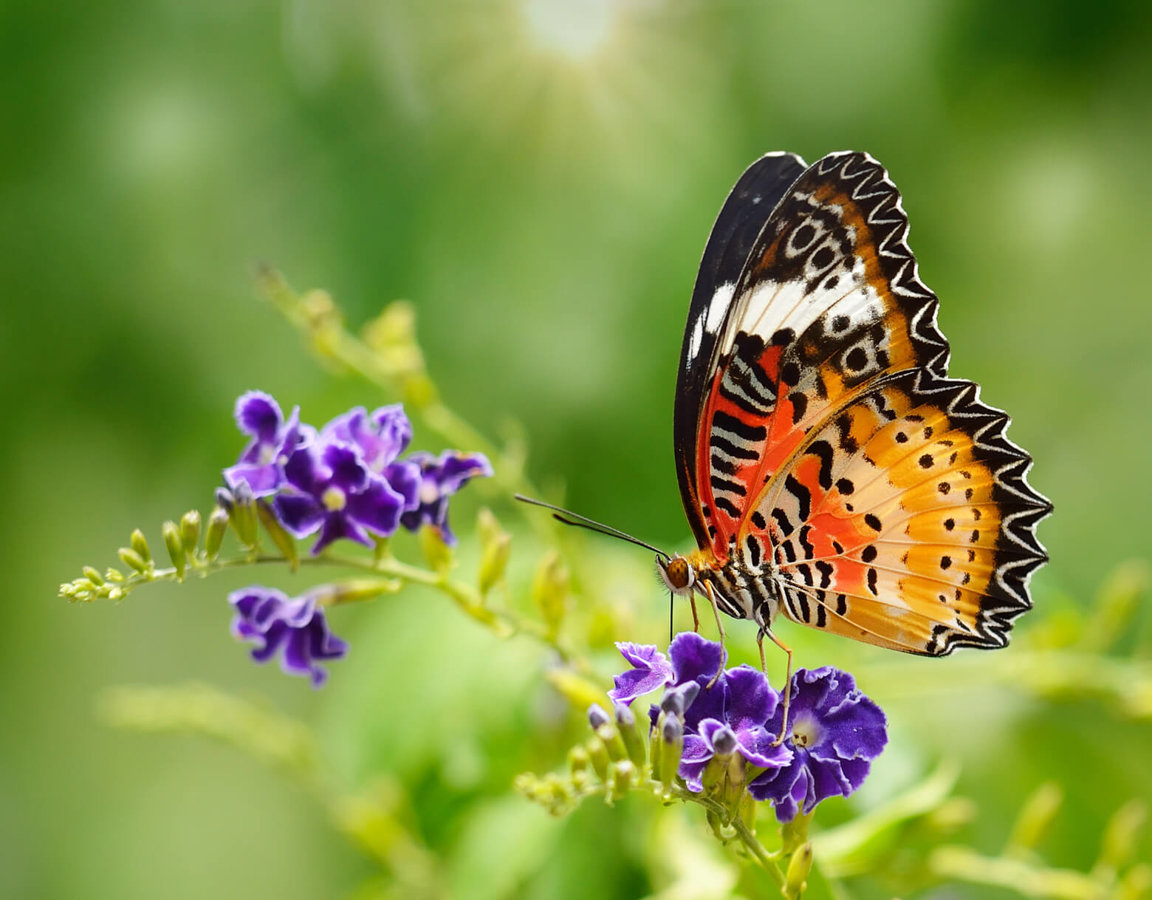 Butterflies are part of the class of insects in the order Lepidoptera. Adult butterflies have large, often brightly colored wings, and conspicuous, fluttering flight. The group comprises the true butterflies (superfamily Papilionoidea), the skippers (superfamily Hesperioidea) and the moth-butterflies (superfamily Hedyloidea). Butterflies are the second largest group of pollinators, following bees. There are about 17,500 species of butterflies spread throughout the world.
These beautiful animals undergo a fascinating metamorphosis which takes place in four stages: egg, caterpillar, pupa and adult.
Mother butterflies attach their eggs with a special glue to caterpillar food, or “host” plant. As the glue hardens it contracts, deforming the shape of the egg. Each species of butterfly has its own host plant range, and while some species of butterfly are restricted to just one species of plant, others use a range of plant species.
Butterfly eggs are protected by a hard shell lined with a thin coating of wax which prevents the egg from drying out. Each egg contains a number of tiny funnel-shaped openings at one end that allow sperm to enter and fertilize the egg. Butterfly and moth eggs vary greatly in size between species.
The egg stage lasts a few weeks in most butterflies. Eggs laid close to winter, especially in temperate regions, go through a resting stage and the hatching may take place only in spring. Other butterflies may lay their eggs in the spring and have them hatch in the summer. These butterflies are usually northern species.
When the caterpillar is born, it eats its egg, then begins eating the host plant. Host plants often have toxic substances in them and caterpillars are able to retain them. This makes them unpalatable to birds, insects and other predators. Such unpalatibility is advertised using bright red, orange, black or white warning colors.
Caterpillars spend practically all of their time in search of food. Some caterpillars form mutual associations with ants. They communicate with the ants using vibrations and chemical signals. The ants provide some degree of protection to these caterpillars, and they in turn gather honeydew secretions. Others caterpillars communicate with ants to form a parasitic relationship.
Some caterpillars have the ability to inflate parts of their head to appear snake-like. Many have false eye-spots to enhance this effect. Some caterpillars produce foul-smelling chemicals used in defense.
When the caterpillar's insides grow too big for its outside, its covering splits and is shed. A new exoskeleton lies underneath. The caterpillar continues to shed numerous times, then becomes a pupa. It then seeks a sheltered spot, suspends itself by silken threads and sheds one more time forming a hard casing around its body. Inside this chrysalis, the pupa is growing six legs, a proboscis, antennae and wings. Within days, months or years, depending on the species, the chrysalis breaks open and a butterfly emerges.
Butterflies can live in the adult stage from a week to a year, depending on the species. They have four wings, usually brightly colored with unique patterns made up of tiny scales. They remember things they learned as caterpillars. They can fly up to 30 mph and up to 50 miles in a day. They learn home ranges and memorize locations of nectar and pollen sources, host plants and communal roosting sites. They are able to plan the most efficient routes by using calculations that mathematicians call the "traveling salesman algorithm".
Butterflies feed primarily on nectar from flowers. They are important as pollinators for some species of plants and are capable of moving pollen over greater distances than bees. Adult butterflies consume only liquids, ingested through the proboscis. They sip water from damp patches for hydration. They feed on nectar to obtain sugars for energy, and sodium and other minerals vital for reproduction. Several species of butterflies need more sodium than that provided by nectar and are attracted by sodium in salt; they sometimes land on people, attracted by the salt in human sweat. Some butterflies also visit dung, rotting fruit or carcasses to obtain minerals and nutrients. In many species, this mud-puddling behavior is restricted to the males, and the nutrients collected may be provided as a gift during mating.
Butterflies use their antennae to sense the air for wind and scents. The antennae are richly covered with sensory organs. Butterflies "taste" with their feet through tiny receptors. Their sense of taste is 200 times stronger than humans.
Butterflies have excellent vision and most species are sensitive to the ultraviolet spectrum. Some butterflies have organs of hearing and some species are also known to make stridulatory and clicking sounds.
Many butterflies are migratory and capable of long distance flights, using the sun to orient themselves. They migrate during the day and use the sun to orient themselves. They also perceive polarized light and use it for orientation when the sun is hidden.
Many species of butterfly maintain territories and actively chase other species or individuals that may stray into them. Some species will bask or perch on chosen perches. Basking is an activity which is more common in the cooler hours of the morning. Many species will orient themselves to gather heat from the sun. Some species have evolved dark wing-bases to help in gathering more heat. The flight styles of butterflies are often characteristic and some species have courtship flight displays.
THREATS TO BUTTERFLIES
The greatest threats to butterflies are habitat change and loss due to residential, commercial and agricultural development. Many butterfly species are either under the threat of extinction, or have died out completely due to the rise of intensive farming and the loss of habitats.
Butterflies have suffered from the loss of grasslands rich in wild flowers and the decline of woodlands.
Pesticides also threaten butterflies.