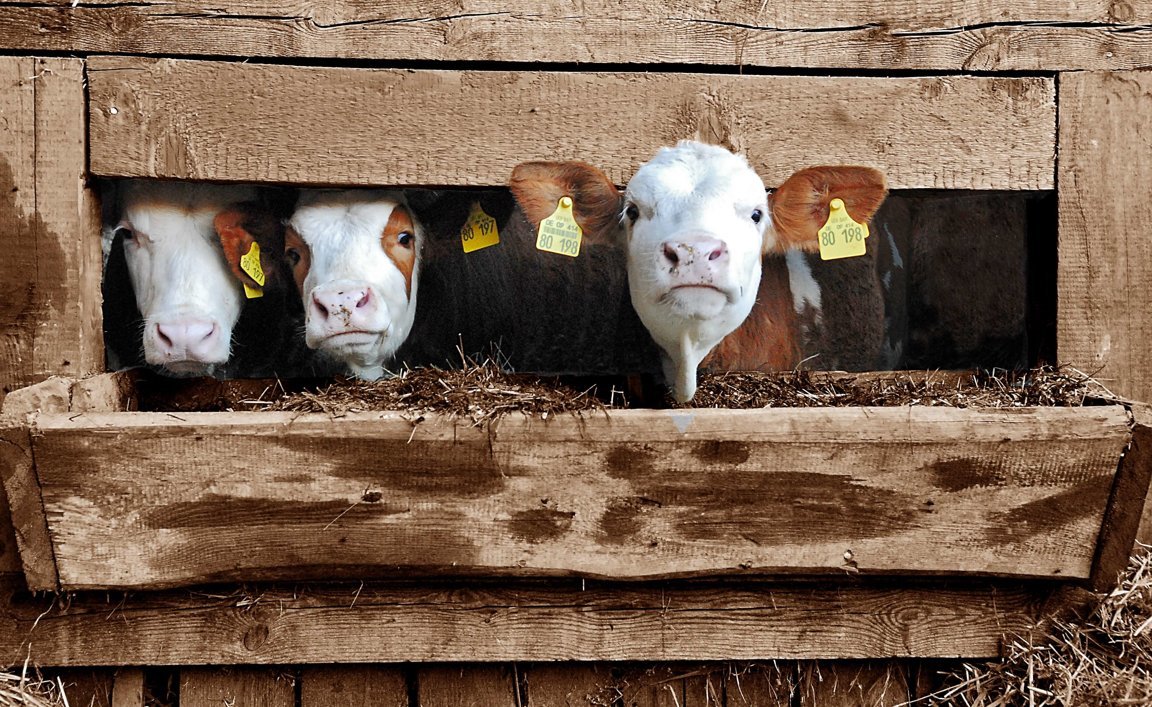 The veal calf industry is one of the most reprehensible of all the kinds of intensive animal agriculture. Male calves used for veal are taken from their mothers one or two days after birth. They are chained inside tiny crates barely larger than their bodies and are usually kept in darkness, except to be fed two or three times a day for 20 minutes. During their brief lives, they never see the sun or touch the earth. They never see or taste the grass. Their anemic bodies crave proper sustenance. Their muscles ache for freedom and exercise. They long for maternal care. About 14 weeks after their birth, they are slaughtered.
The veal calf's permanent home is a veal crate, a restraining device that is so small (22 inches by 54 inches) that the calves cannot turn around. Designed to prevent movement (exercise), the crate does its job of atrophying the calves' muscles, thus producing tender "gourmet" veal. The calves often suffer from open sores caused by the constant rubbing against the crates.
In 1996, the European Union voted to ban the veal crate across Europe. Yet it is still perfectly legal in the United States.
The calves are generally fed a milk substitute intentionally lacking in iron and other essential nutrients. This diet keeps the animals anemic and creates the pale pink or white color considered desirable in veal. Craving iron, the calves lick urine-saturated slats and any metallic parts of their stalls. Farmers also withhold water from the animals, who, always thirsty, are driven to drink a large quantity of the high-fat liquid feed.
Because of such extremely unhealthy living conditions and restricted diets, calves are susceptible to a long list of diseases, including chronic pneumonia and "scours," or constant diarrhea. Consequently, they must be given massive doses of antibiotics and other drugs just to keep them alive. The antibiotics are passed on to consumers in the meat and that's not all that's passed along.
Federal agents have found more than a dozen veal production companies giving calves clenbuterol, a dangerous and illegal drug that speeds growth and increases anemia in the calves, producing more expensive white meat. Calves treated with clenbuterol can be sold for slaughter at 12 to 13 weeks, rather than the standard 16 weeks. Even trace amounts of clenbuterol can cause severe illness in humans, including increased heart rate, tremors, breathing difficulties, fever and even death.
Veal calves are a byproduct of the dairy industry; they are produced by dairy cows, who are kept constantly pregnant to keep milk production high. Their female calves are raised to be living milk machines like their mothers...confined, fed synthetic hormones and antibiotics, artificially inseminated, and slaughtered after their milk production drops or they are slaughtered for the rennet in their stomachs (used to make commercial cheese). Since male calves cannot produce milk, they are often taken away from their mothers at 1 or 2 days old and put into crates to be killed for veal. The milk that nature meant for them ends up on our supermarket shelves instead.
WHAT YOU CAN DO
Factory farming is an extremely cruel method of raising animals, but its profitability makes it popular. Farm animals are sentient beings that experience all the same emotions we do. The best way to save animals from the misery of factory farming is to stop or reduce your consumption of meat, milk, cheese and eggs.