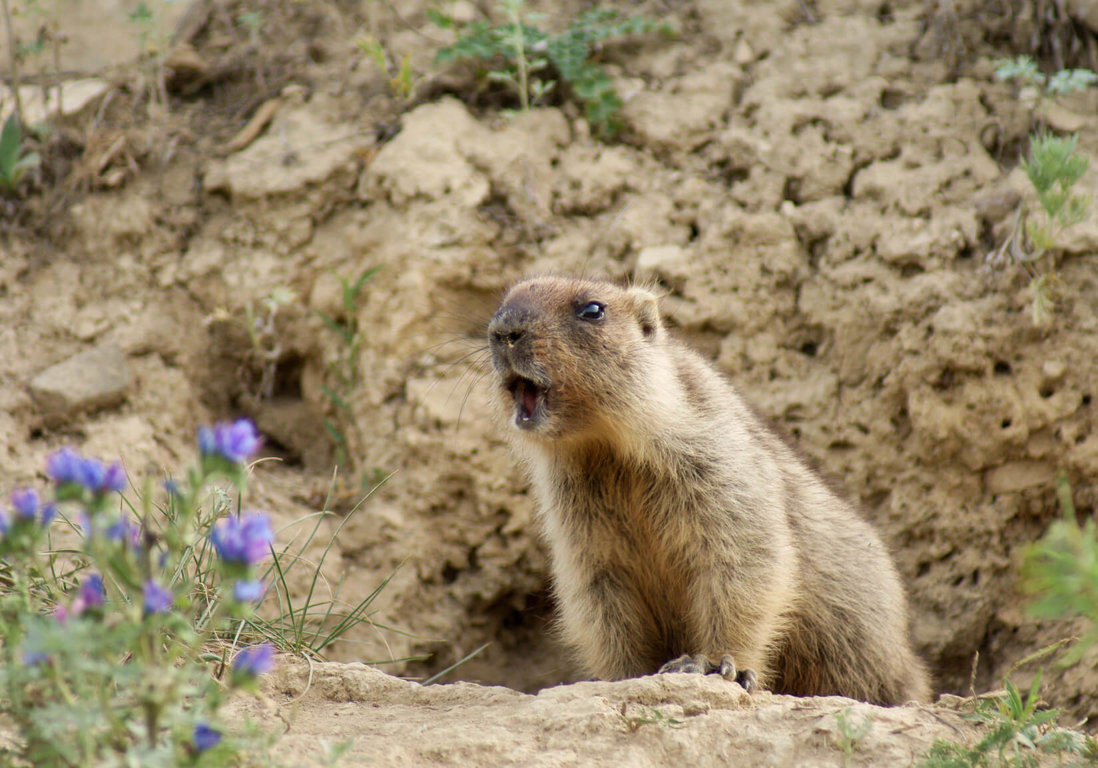 Woodchucks are harmless, comical vegetarians who are commonly sighted in suburban backyards and along roadways. Conflicts usually arise over who gets to eat the garden vegetables. Suburban landscapes provide perfect habitat for woodchucks. Our raised decks provide cover and a perfect place to raise young, and our lush lawns provide a virtual buffet. Most woodchuck conflicts occur in spring and summer, just when birthing season has begun. That's why problems need to be solved in a way that doesn't leave orphaned young behind.
KEEPING WOODCHUCKS OUT OF GARDENS
The best way to exclude woodchucks is by putting up a simple chicken wire or mesh fence. All you need is a roll of 4-foot high chicken wire and some wooden stakes. Once the job is done, it won't matter how many woodchucks are in the neighborhood because they won't be getting into your garden.
There are 2 secrets for making a successful fence:
Tip #1: The top portion of the fence only needs to be 2 ½ to 3 feet high but it should be staked so that it's wobbly -- i.e. the mesh should not be pulled tight between the stakes but rather, there should be some "give" so that when the woodchuck tries to climb the fence, it will wobble which will discourage him. Then he'll try to dig under the fence, so:
Tip #2: Extend your mesh fence 4 inches straight down into the ground and then bend it and extend the final 8-12 inches outward, away from the garden, in a "L"-shape which creates a false bottom (you can also put this mesh "flap" on top of the ground but be sure to secure it firmly with landscaping staples or the woodchuck will go under it). When the woodchuck digs down and hits this mesh flap, he'll think he can't dig any farther and give up. It won't occur to him to stand back a foot and THEN start digging!
IF YOU AREN'T WILLING TO PUT UP A FENCE, you can also try the following scare techniques, which do work in some cases:
1) Line your garden with helium-filled, silver mylar balloons or make a low fence of twisted, reflective mylar tape bought at your local party store. Be sure to purchase heavier weights to attach to the bottom of the balloons. The balloons bobbing in the wind will scare the woodchucks.
2) Sprinkle cayenne pepper around the plants and spray your plants with a taste repellent such as Ropel (available at garden stores) every 2 weeks.
GETTING WOODCHUCKS OUT FROM UNDER SHEDS
Woodchucks don't undermine foundations and really aren't likely to damage your shed. In spring and summer, the woodchuck under your shed is probably a mother nursing her young, which is why you should consider leaving them alone. Be sure you really need to evict the woodchuck before taking action. If you must, put some dirty kitty litter down the woodchuck burrow -- the urinated part acts as a predator odor, which often causes the entire family to leave. Ammonia-sprinkled rags or sweaty, smelling socks placed in the burrow may also cause self-eviction.
WOODCHUCKS & CHILDREN
Woodchucks are harmless vegetarians who flee when scared. Remember that even a small child looks like a giant predator to the woodchuck. There is no cause for alarm. Woodchucks live under houses and day care centers all over the country. Healthy woodchucks simply don't attack children or pets. If chased, woodchucks will quickly flee to their burrows.
WOODCHUCKS & RABIES
Woodchucks have a higher susceptibility to rabies than other rodents, yet the incidence of rabies in woodchucks is still very low. Woodchucks are much more susceptible to the roundworm brain parasite, which causes symptoms that look exactly like rabies. Roundworm is NOT airborne -- it can only be transmitted through the oral-fecal route, i.e. the ingestion of an infected animal's feces.
SETTING A TRAP FOR WOODCHUCKS & CATCHING A SKUNK
This is a common occurrence when traps are left open at night. You can let the skunk out without getting sprayed just by knowing that skunks have terrible eyesight and only spray when something comes at them fast, like a dog. If you move slowly and talk soothingly, you shouldn't get sprayed. Skunks stamp their front feet as a warning when they're nervous, so if the skunk stamps, just remain motionless for a minute until he stops stamping, then proceed. You can drape a towel -- slowly-- over the trap prior to opening it. Once the trap door is opened, the skunk will beeline for home. If you must trap and relocate a woodchuck, remember to close the trap at night so another skunk doesn't get caught.
TRAPPING WOODCHUCKS
Trapping won't solve the problem. As long as woodchuck habitat is available, there will be woodchucks. Even in studies where all the woodchucks are trapped out of an area, others from the surrounding area quickly move into the vacated niche. In addition, trapping and relocating woodchucks may lead to starving young being left behind. Homeowners are then horrified to smell a foul odor. It's much more effective to simply exclude woodchucks from areas where they're not wanted. Don't trap unless an animal is stuck somewhere and can't get out, or poses an immediate threat to humans or domestic animals.